You are at:Home»Equity ETFs»We’re in ‘Biggest Bubble in History,’ Says Ron Paul 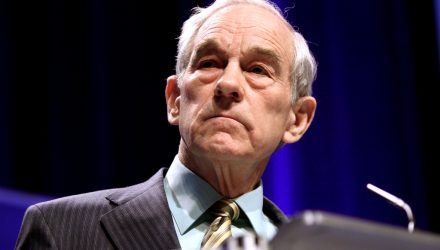 Former Texas U.S. Congressman and three-time presidential candidate Ron Paul told CNBC that the serendipitous bull market since the financial crisis of 2007-08 is signaling the “biggest bubble in the history of mankind,” which could spell doom for the capital markets.

In the last five years, the Dow Jones Industrial Average has risen by about 61 percent and with the Federal Reserve hawkish on the economy, most signs point to the continued running of the bulls. In addition, the Dow has never fallen below its 200-day moving average in the past five years.

However, Paul senses things are ready to go awry and it’s because of two major factors

“I see trouble ahead and it originates with too much debt, too much spending,” said Paul.