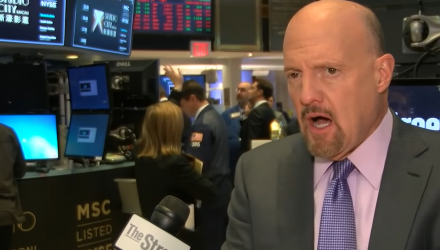 “I just think he’s going to blink,” Cramer said on “Squawk on the Street.”

“It’s going to be one and done in December. That’s what I’m saying is happening,” Cramer added. “And then he’s going to pause.”

As companies continue to light up the third quarter earnings scoreboard, Cramer is seeing one statistic that could be a cause for concern–35% of companies that have already reported have missed Wall Street expectations.

“These numbers are going to be watched,” he said.

In the meantime, earnings weeks continue for U.S. equities as companies continue to report third quarter results with tech giants like Alphabet (Google’s parent company), Microsoft, Twitter, and Amazon scheduled to report. On a recent episode of “Mad Money,” Cramer addressed the Fed, saying the Federal Reserve should embark on a field trip to Silicon Valley “so they can get a sense of all the jobs that are in jeopardy and all the ones that are being destroyed by the hour. Otherwise, the Fed is never going to understand that digitization is doing a better job of keeping inflation in check than the blunt instruments of rate hikes ever could.”

Existing home sales languished in September, falling to its lowest level since 2015 as mortgage rates continue to move higher, according to the most recent data from the National Association of Realtors (NAR). Notable highlights from NAR’s latest data revealed that contract closings fell from the prior month to a 5.15m annual rate, the median sales price rose 4.2% year-over-year to $258,100 and housing inventory of available properties moved up 1.1% year-over-year to 1.88m.