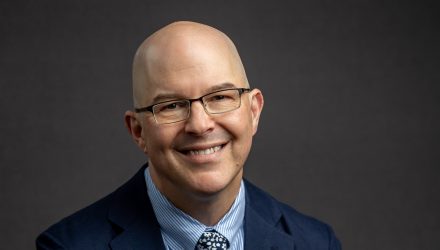 Communication in 2022 almost always has a veneer of technological intermediation. I’m not sure how we’d measure it, but I’d posit that the modern adult in 2022 spends far less time in face-to-face communication, as a percentage of their interactions, than they did even a few years ago, much less 20 or 30 years ago. We crazy humans have invented an incredible suite of tools to help us connect with folks: telephones, network news, email, Zoom, Slack, Twitter, Reddit, and 4chan. All connect Person A with Person(s) B-n, for better or worse.

This connectivity boom was also supposed to transform the business of investing and financial advice. Back in the ’90s, I was part of a dreamy-eyed crew of investment optimists who believed Raging Bull message boards and the Motley Fool would replace traditional Wall Street analysts. Communications tech was going to empower investment conversations, so the best ideas always surfaced. We, the collective internet denizens, would then take all this great insight and make better decisions. We would take actions that improved our portfolios and thus, hopefully, our lives.

I think it’s safe to say that we were mostly wrong and a little right. We were right that the technology would mean the demise of sell-side analysts. We were wrong that the best ideas would rise to the top (despite the now –legendary Iomega parking lot checks). It turns out that you can’t actually trust anonymous people on the internet. Who knew?

Fast forward 20 or so years, and we’ve seen the rise of the Robo-Advisor — a system designed to take action for investors and the most action-oriented investment tech of all: the swipe-to-trade gamification of Robinhood. Has any of this made a real impact on the actual business of being a financial advisor?

The advisor technology arena is…intimidating. Nobody keeps track of it like the team over at Kitces.com. Derek Tharp at Kitces.com’s last report on the topic is 74 pages of 10-point type. The Map of current solutions is an overwhelming eye-chart at this point, with new products being added almost literally every week: 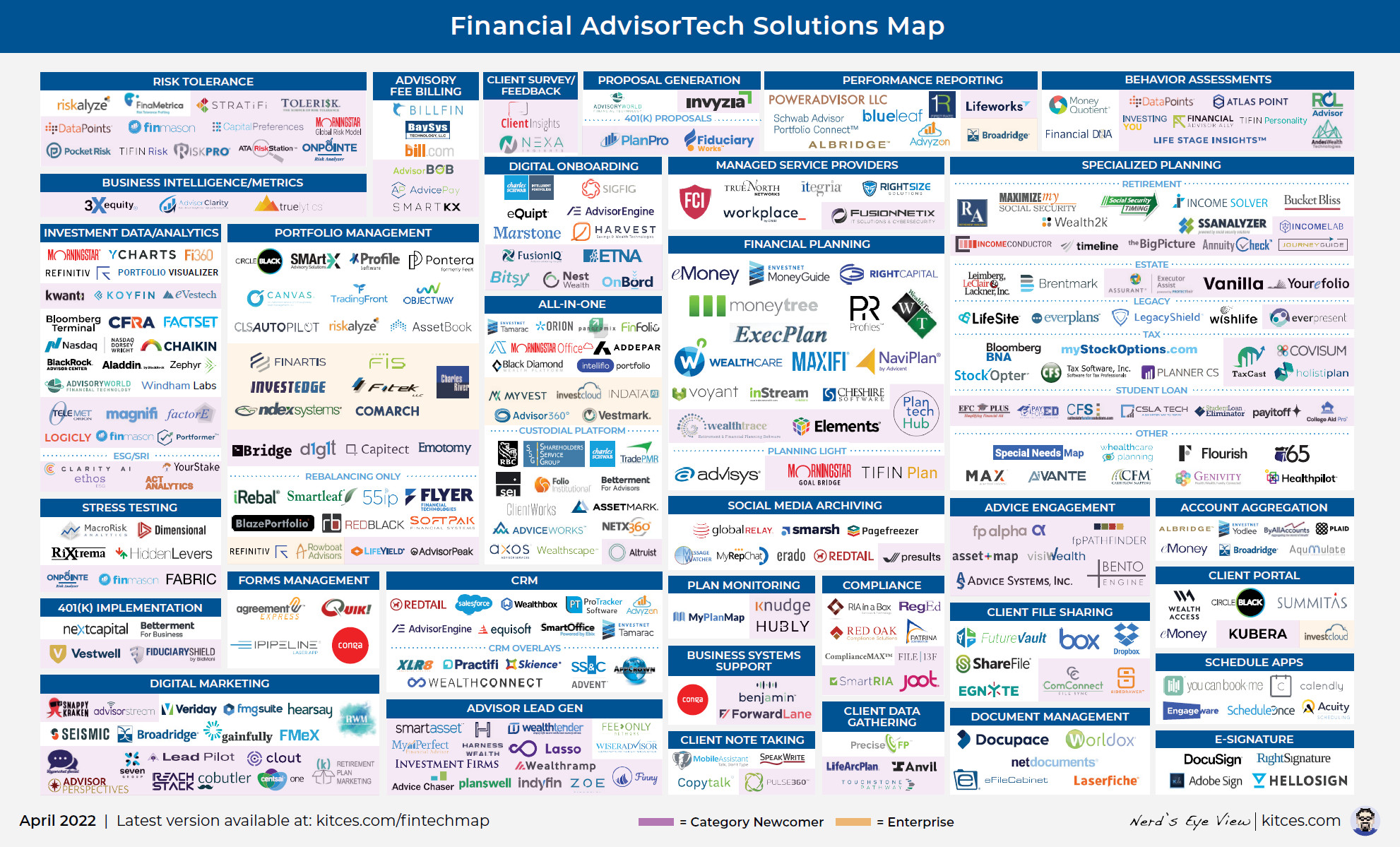 With all this technology, from risk assessment to financial planning to portfolio management, have advisors actually made their processes more efficient? Better decisions, more effectively put into action?

Technology has allowed advisors to do a few things a lot better; it has absolutely sped up and streamlined certain parts of the implementation. It’s never been easier to run a model portfolio, keep your CRM up to date, do investment research, and manage client cash flows and rebalancing needs. But an enormous amount of this tech stack is focused on the research and portfolio management part of being an advisor: an activity that a 2019 VettaFi survey suggested that advisors spent less than eight hours a week on. As Michael Kitces himself, patron saint of financial planning, put it when referring to Kitces’ own research on advisor time usage: “The average advisor spends about 11% of their time on investment-related stuff. That’s it. A hundred percent of the fee is AUM, 11% of the time is portfolio managing!”

So yes, all that tech does free up some time, but interestingly, that extra time isn’t translating into a bigger business. “Technology was supposed to make advisors more efficient to handle more clients,” explained Kitces. “But in practice, client loads aren’t rising materially even with the onslaught of great technology.” Indeed, Kitces’ surveys suggest that an advisor’s time with their client goes up when they have a fully integrated tech stack that makes planning, data gathering, and recommendation generation more automated. “When advisors get better technology, they don’t serve more clients; they serve their current clients better and more deeply,” he concluded.

Imagine that? Imagine if our reliance on technology actually enabled us to be, you know, more human. Not less. What if it lets us spend more time in conversation and less on the screen?

This was a bit of an “aha moment” for me. I’ve spent the past 20 or so years of my life hanging out with, researching, and just generally getting to know financial advisors, and it’s reasonable to ask, “Why?” The answer, I’ve come to realize, is that I am such a natural introvert that I find someone actually having difficult, often emotional conversations with people who would otherwise be strangers for a living to be as incomprehensibly superhuman as someone who can draw photorealistic portraits on a street corner. I literally marvel at it. Every advisor I know is a good conversationalist — a great dinner companion. Really good advisors are Dale Carnegie machines, able to get their clients talking about their fears and hopes and helping clients with empathy rather than just math.

That’s the real gate to any business that requires empathy. Having empathy means having the ability to have a Theory of Mind for someone — literally the ability to put ourselves in their shoes and imagine what it is like to be them. This is a problem because it turns out that we humans can only have so many genuine relationships before we resort to abstracting individuals into buckets. This is neither an obvious nor original idea: Robin Dunbar did the work on this 30 or so years ago, and then Malcolm Gladwell turned it into a PopSci idea in “Tipping Point,” and countless behavioral psychologists, neurologists, and sociologists have continued to prove that there are simply limits to how big our group of “real connections” can be — somewhere between 100 and 300 depending on whose research you read, with the PopSci number of 150 having grabbed the zeitgeist.

So if we can only have 150 or so “real” relationships, making sure those are good, productive relationships seems incredibly important. Those conversations better really matter.

It turns out they really do. Vanguard published a cool study on the value of the human being in advice in 2021, and the conclusions probably won’t surprise you: The human advisor has an enormous impact on the mental state of their clients: 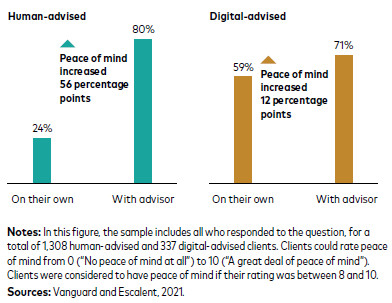 The “Peace of Mind” from the Vanguard research isn’t because the human advisor necessarily gave them a higher portfolio value (and sure, there’s a self-selection bias, but that’s telling too). Peace of mind comes from empathy — they feel better knowing they have a relationship with someone who understands them, who actually listens to them, and who at least projects an aura of data-fueled comprehension about the highly emotional topic of money.

But feeling better because you have a conversation with someone who understands you isn’t the same as actually making a difference.

Financial advice suffers from the same last-mile problem as most businesses. Niche French-language advisor Guillaume Decalf of OuiFinancial has an interesting perspective, as he was a late-career changer to financial advice from the world of technology project management. “Clients are paying me to tell them what to do. I cannot force them. As a Project Manager, you have some power — if someone doesn’t do their task, they’re going to be in trouble. With clients, it’s not the same. I’m not the boss. So, my job is to remind them what to do and educate them about why, but in the end, they have to do it.”

This is a near-universal complaint I’ve heard from financial advisors over the years. Often the simplest-sounding advice like “update your will” or “sign the paperwork to consolidate this account” ends up being the Achilles heel in transitioning from the conversation to the financial outcome. As Decalf explained: “I have a repeatable process. I have technology; I have templates; I have everything. And then there was a missing piece that I couldn’t find. It’s like, how can I find a tool that allows me to give tasks to my clients?”

One Solution/Knudge’s Nudging Call to Actions

So where’s the support system for that superpower — financial empathy? Honestly, in my troll through the tech stack, I could only find one tool that seemed focused on picking up the ball after the hard conversations are done, and it’s a rather unassuming tool called “Knudge.” Knudge was the brainchild of financial advisor Shaun Erikson, who had a simple observation about his own practice. “We really focused on ensuring that advice wasn’t just given, but that it was followed through. And that’s a pretty labor-intensive thing,” he recalled. “There are only so many hours in the day for that communication!”

So looking at the same eye chart of tech solutions, he came up blank for a tool that could help and just decided to build one himself with the help of technologist Dave Connolly and a team of advisors (including folks who know a bit about this, like Dr. Moira Somers, author of the excellent “Advice that Sticks” (it’s great, go read it). In a nutshell, it’s “just” a task list system for advisors’ clients.

“People pay their financial advisors’ hard-earned money to get advice. If they don’t act on that, then they’re not getting the value out of it,” explained Connolly of Knudge. It’s honestly just that simple: It’s a task management system designed to encourage accountability for clients in the financial planning process. Or, put another way, it’s a platform that helps make sure actions are actually taken due to trusted, empathy-laden conversations.

To be clear, I don’t know them from Adam, but I’m intrigued at the idea of embedding more nudges into our lives in general, and society more broadly, too — you know, actually get something done.

But Words Matter Too

Part of what’s so satisfying about something like Knudge is that it seems so radically simple. It is, as Decalf put it, just a “task management system for financial advice clients.”

We’re at a bit of a crossroads in human communication. I won’t go down the political rabbit hole here, as it’s not really my gig. I highly encourage folks to listen to this podcast with Ben Hunt and Jim O’Shaughnessy if you really want to get into the sordid underbelly of why we’re in a neurolinguistic crisis of salience.

At the end of the day, I waded through the whole tech stack, found a few cool new ideas, and kept running up against the same wall: The scarce resource is time, and there’s just so much noise. If I have a take-away for the average advisor reading this, it’s to remind yourself daily where you add the most value — the conversation. But even that’s not enough without action.

Under our new banner (VettaFi, have you heard?), we’re doing what we can to keep conversations fact-based and human, and I think we do a pretty good job. Finance is a data-intensive business, and we’re working to humanize the data and put data around the human side of the business.

But none of this is sufficient on its own. The data matters. Reality matters. The human conversations based on empathy matter. But without action, none of it actually makes a difference. Nudges are sometimes what we need…whether it’s a piece of software or just a headline.

Read into that what you will.