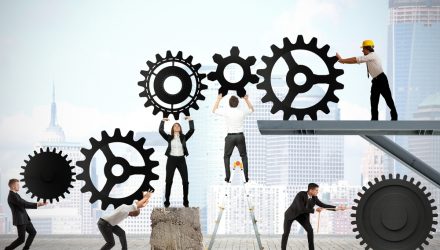 Active Funds Are Faring Better This Year Than in Years Past

Despite the grim headlines on active management, active U.S. stock funds have fared better thus far in 2022 than they have in years past. In a tweet posted on Sunday, Morningstar’s chief ratings officer Jeffrey Ptak wrote that roughly “60% of such funds posted higher returns than their style-specific benchmark YTD through 4/30/22.”

Ptak added that this is because they “did well during the two drawdown periods” from January 1 through March 14, and from March 30 through April 30. 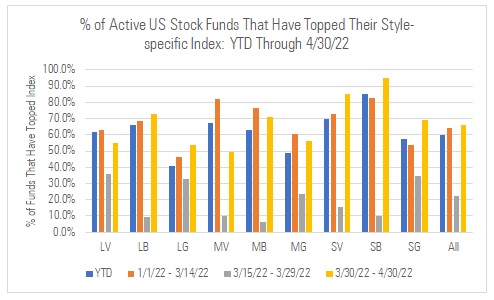 The Morningstar executive provided more of a close-up view of the overall success rate for the year-to-date through April 30 in a follow-up tweet. 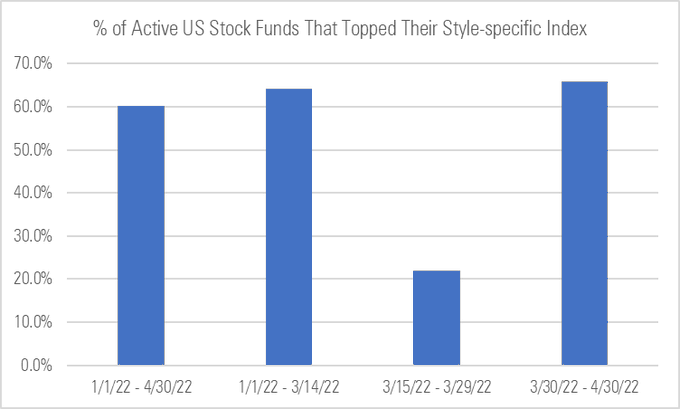 “Active managers’ ability to sell shares of out-of-favor companies and refocus the portfolio during market volatility is a key reason investors are willing to pay higher fees,” said ETF Trends’ head of research, Todd Rosenbluth. “The start of 2022 has been an ideal time for active managers to shine.”

Ptak explained in an email that in the past four months, “active funds have succeeded in greater numbers recently … likely boils down to mismatches between active fund exposure and the benchmarks.”

“Sources of mismatch can include cash holdings, non-benchmark positions, as well as holdings weighting differences,” said Ptak, adding that while “benchmarks are style pure and fully invested … active funds can be style impure and hold cash.”

Investors continued to put money into active ETFs at a near-record pace in Q1 amidst the multiple headwinds the sector faced. Data from FactSet show that assets managed in active ETFs reached $306.1 billion as of March 31, up $103 billion year-over-year. The market also saw 16 firms launch their first actively managed funds in Q1, including new entrants in the ETF space such as Capital Group, Engine 1, Fairlead, Ameriprise/Columbia, and Build Asset Management. In total, these firms raised nearly $1 billion during the quarter.