You are at:Home»ETF Strategist Channel»The Odds of a Positive Resolution to Trade Disputes Have Increased 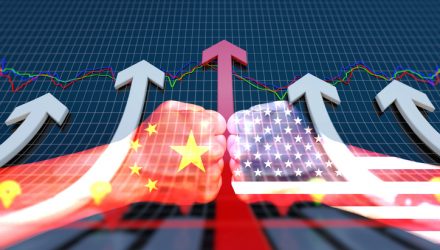 The Odds of a Positive Resolution to Trade Disputes Have Increased

In RiverFront’s 2018 Outlook, we contended that President Trump’s approach to trade disputes was a key variable that could catalyze our optimistic upside scenario for financial markets or derail the accelerating global recovery by inadvertently igniting a trade war. We believe that recent developments in the Trump Administration’s ongoing trade dispute with China have increased the odds of a positive outcome, and that the probability of our Pessimistic, Baseline and Optimistic Scenarios are all now approximately equal at 33%.

The table above depicts RiverFront’s predictions for 2018 using 3 scenarios (Baseline, Optimistic, Pessimistic). Our assessment of each scenario’s probability is also shown. Please note that these predictions reflect RiverFront’s views as of the date of publication.  These views are subject to change and are not intended as investment recommendations. There is no representation that an investor will or is likely to achieve positive returns, avoid losses or experience returns as discussed for various market classes.

In an April 11th speech, Chinese President Xi Jinping offered several concrete and meaningful concessions on trade These concessions included lowering China’s tariffs on imported cars and eliminating the requirement that foreign companies operate in China through Chinese controlled joint ventures.  President Xi also offered platitudes about protecting intellectual property that may or may not amount to much, but his rhetoric creates an opportunity for President Trump to save face with his base and claim a win.  Yi Gang, governor of the People’s Bank of China, followed the next day with a proposed package of reforms that would substantially liberalize foreign access to China’s financial sector.

We think the combination of Xi’s and Yi’s proposals form the basis for a potential deal.  President Trump is unlikely to want a trade war to dominate headlines and financial markets in the run up to the midterm elections, especially since China has made clear that their retaliation will specifically target farm exports from parts of the country that strongly support him.   Treasury Secretary Mnuchin will undoubtedly remind the president that financing our $1 trillion deficits will be much easier with China’s cooperation, and our new Secretary of State could make a similar point about the upcoming summit with North Korea.  Agreeing to the existing package of Chinese proposals allows President Trump to show his base that he kept his campaign promises regarding trade without the dire consequences predicted by his opponents.   If China fails to implement the proposed reforms or if these reforms prove inadequate to shrink the trade deficit, then the Trump Administration can renew their confrontational strategy after the midterm elections.

A positive resolution to the current trade disputes may become even more important if additional concerns arise for the Trump administration and financial markets.  Special Counsel Robert Mueller’s investigation appears to be increasingly aggressive in targeting figures close to the President.  Should President Trump fire Assistant Attorney General Rod Rosenstein (Mueller’s boss) or even Mueller himself (which his administration recently asserted he has the authority to do), it could prompt a severe political backlash in Congress and in the midterm elections.    The Syrian poison gas strike raises the prospect of deeper involvement in the conflict and potentially a direct confrontation with Russia.   We believe that even a confrontational personality like President Trump might want to eliminate the prospect of a trade war before engaging in additional controversial policy initiatives.

President Trump has an offer from China’s leadership that, if accepted, has the potential to substantially change the trading relationship between the US and China.  However, a frequent complaint we hear from US companies operating in China is that negotiations truly begin after an agreement is signed.  Significant disagreements frequently arise over the meaning of contractual obligations and the extent to which those obligations have been met.   US trade negotiators may find that China agrees to sweeping changes, but the actual implementation of those changes consistently falls short of expectations.