You are at:Home»Crypto Channel»Stock ETFs Pare Thursday’s Gains Thanks to Fresh Crypto Concerns 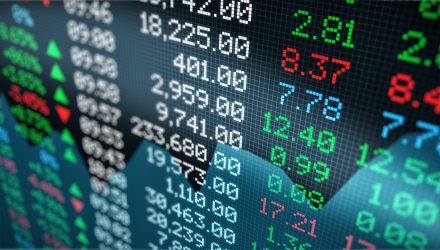 On Friday, cryptocurrency news drove stocks and index ETFs to pare gains from the prior session, when they recovered from three consecutive losing days.

The Dow Jones Industrial Average climbed 0.32% Friday, after rallying in the previous session. The S&P 500 traded slightly lower meanwhile, after gaining 1.1% Thursday, and the Nasdaq Composite fell 0.31% over cryptocurrency woes, after advancing more than 1.7% in the prior session.

Stocks did receive a sentiment boost from some fresh economic data on Friday, however. The IHS Markit Flash U.S. Manufacturing Purchasing Managers’ Index popped to an all-time high of 61.5 in May from 60.5 in April. Economists polled by Dow Jones had expected the index to hold steady.

“The first major economic data point for the month of May was very strong,” Adam Crisafulli, founder of Vital Knowledge, said in a note. “We already know the Fed is thinking about tapering and this release may cause them to think about it a bit harder, but stocks should be fine so long as the Fed doesn’t signal a taper before Nov.”

However, cryptocurrencies struggled once again on the last trading day of the week, as Bitcoin tumbled again after Chinese Vice Premier Liu He expressed concerns about Bitcoin mining and trading patterns, and argued that stricter regulation is necessary. The notoriously volatile cryptocurrency had fallen as much as 30% earlier in the week due to similar fears. Bitcoin last traded more than 5% lower, below $37,500.

“Crypto, after all, is the poster child for liquidity-induced speculation and the fact that this is now deflating … lends credence to the sense that risk markets are now starting to adjust to the looming prospect of peak-liquidity,” a JPMorgan strategist said in a note.

Investors looking to avoid some of the volatility of crypto trading have considered more tepid dividend-paying stocks and ETFs like the KFA Small Cap Quality Dividend Index ETF (KSCD), which gained 1% Friday.

Stocks and index ETFs rallied on Thursday, as the number of first-time claims for unemployment benefits for the week ended May 15 came in at 444,000, the lowest since March 14, 2020, according to data from the Labor Department reported. Economists surveyed by Dow Jones had been projecting 452,000 new claims.

“The jobless claims read shows once again that that we’re heading in the right direction,” said Mike Loewengart, managing director of investment strategy at E-Trade Financial. “While inflation has been the star of the show, keep in mind that the Feds mandate is two-fold—with employment as the other side.”

The economic data encouraged other analysts as well.

Thursday’s “jobless claims improvement furthers our view the disappointing April jobs report was likely a blip rather than a sign of deceleration, and we anticipate meaningful labor market improvement in coming months,” said Scott Ruesterholz, a portfolio manager at Insight Investment.

On Wednesday, investors also reacted to the Federal Reserve’s minutes from April that suggested there may be tapering of its asset purchase programs in upcoming meetings.

“A number of participants suggested that if the economy continued to make rapid progress toward the Committee’s goals, it might be appropriate at some point in upcoming meetings to begin discussing a plan for adjusting the pace of asset purchases,” the Fed minutes said.

Financial pundits seemed unruffled by the possibility of changing interest rates and monetary policy, yet acknowledged that the concerns are troubling to both investors and companies.

“From our perspective, we do not anticipate that this sharp uptick will translate into a prolonged period of elevated inflation, nor do we believe the Fed is currently running the risk of a policy mistake down the road by not pulling forward its timeline on tapering and rate hikes, as some pundits are suggesting,” Brian Belski, chief investment strategist at BMO Capital Markets.

“Nonetheless, there is no doubt that companies are discussing these pricing pressures, and so too are our clients,” he added.