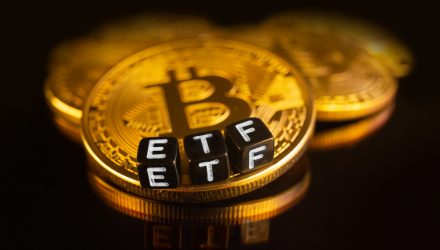 Those of us nerds who spend a good chunk of our lives making side bets on SEC approvals are in a pickle right now, because we just can’t get the odds right on a bitcoin ETF.

Don’t get me wrong: I think a Bitcoin ETF is incredibly important (enough I wrote a whole article about it). As I’ve pointed out a few times this year already, I think the way we get to our crypto-wonderland-future isn’t by blowing up the system that exists, but by bridging from it. Products that explicitly bridge the securitized economy (e.g., ETFs) and the crypto economy (e.g., Bitcoin) are super important to making that happen. A Bitcoin ETF would do just that: 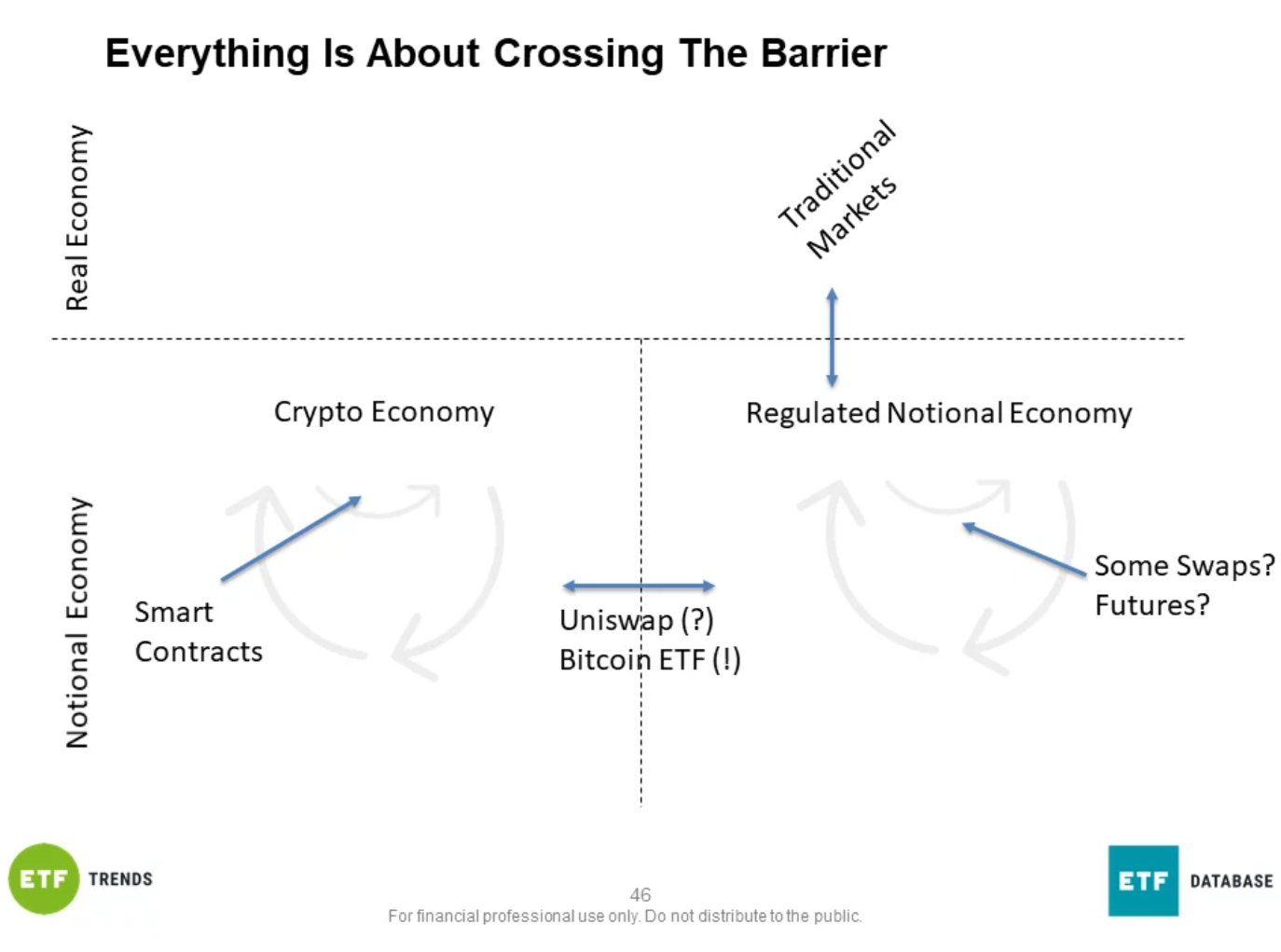 Of course, the right way to package Bitcoin in an ETF would be to make a “GLD for Bitcoin.” That is, launch a fund that just sticks coins in a vault, then runs the creation/redemption process in and out to maintain accurate pricing.

However, as SEC Chair Gary Gensler has made very clear, his agency is only interested in considering ’40 Act funds. The much reported money-quote from his speech:

I anticipate that there will be filings with regard to exchange-traded funds (ETFs) under the Investment Company Act (’40 Act). When combined with the other federal securities laws, the ’40 Act provides significant investor protections.  Given these important protections, I look forward to the staff’s review of such filings, particularly if those are limited to these CME-traded Bitcoin futures.

Which has led to a raft of filings for precisely that. From Bloomberg’s excellent (if firewalled) tracker: 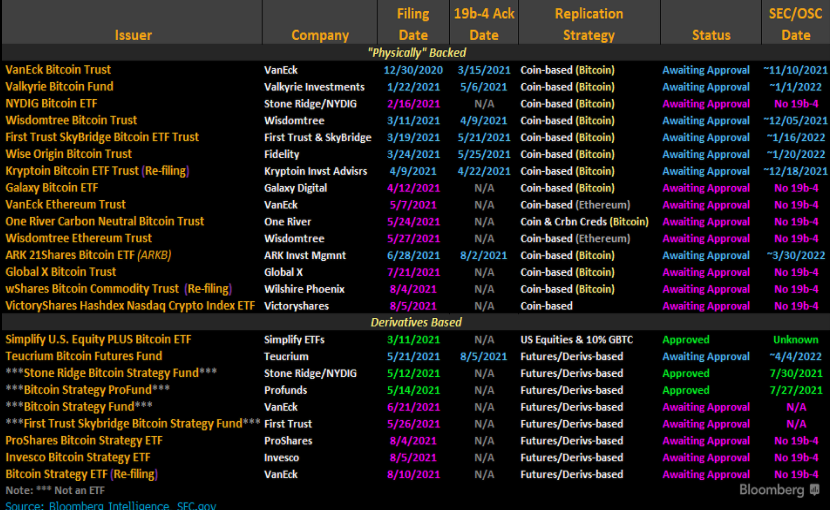 By my count, there are already five filings for Bitcoin futures ETFs and likely more on the way, piling on the back of ProShares mutual fund launch just a few weeks ago.

That’s a lot happening in a short span of time. But in my opinion, the true state of play for a bitcoin ETF now boils down to this:

If I was a betting man, I’d put money on filings with this broad scope getting commented back into the futures-only bucket, at least In round 1.

What might be news to some folks is that all of these bitcoin futures-based filings (except Teucrium’s) make use of a peculiar loophole in the IRS rules for funds holding futures contracts.

If you don’t file your futures-based ETP under the Investment Company Act of 1940 — that is, the piece of legislation which governs mutual funds, unit investment trusts, closed end funds and ETFs — then technically, you’re not filing for a “fund” at all. Instead, you’re proposing a Commodities Futures Trading Commission (CFTC)-regulated commodities pool under the Securities Act of 1933 — a separate piece of legislation which determines what can and can’t be listed on a U.S. exchange.

The upside to skipping the 1940 Act is that you don’t have to deal with all those pesky investor protections, like independent boards and so on. The downside is that a commodities pool, which holds futures contracts and cash collateral, gets taxed weirdly: Investors receive a “K-1” partnership form for their taxes, which passes all gains from the futures contracts to the investor as if they were sold. The investor then pays a blended 60/40 long/short capital gains tax on that marked-to-market amount.

Whether a K1-issuing ETP is a good or bad depends on your individual tax situation and how much complexity you can handle. If you’re trading the ETP a bunch, the futures exposure might be a net benefit. If you’re sticking the fund in a bucket for a decade, then it’s a pure pain in the you-know-what.

One workaround is to create a regular old mutual fund under the 1940 Act, then run 25% of your assets through a Cayman Islands subsidiary, leaving the other 75% in cash equivalents. The Cayman Islands subsidiary then buys all your futures contracts for you, and under-collateralizes them so that the notional exposure is levered back up to 100% notional exposure. This is relatively easy to do, since the margin requirements for futures contracts trading on the CME is only 37%.

Put another way: If there’s $100 in the bitcoin futures ETF, then $25 of it goes to the Cayman’s, where someone in a white button down, short-sleeve shirt buys $68 of bitcoin futures, then uses a line of credit to fund the remaining $32 in exposure by borrowing $12 from a bank.

If all of that sounds confusing, well, it is. But it’s also how the most successful commodities products of the past decade work–including the already approved and trading ProShares Bitcoin mutual fund.

Because I can’t stop myself from making actual calls, here’s how I’d handicap the race to the first bitcoin ETF. In order of likelihood:

Those really seem like the only outcomes at this point. If nothing else, the SEC never fails to provide opportunities to make some popcorn, sit back, and watch the show.