You are at:Home»Crypto Channel»Blockchain ETFs Are Significantly Less Risky Than Directly Holding Bitcoin 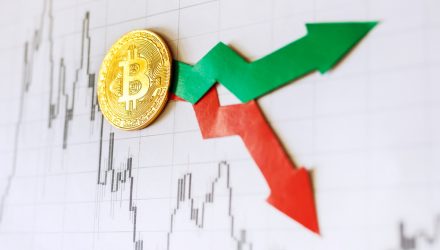 The cryptocurrency market cap topped $2 trillion this August, with Bitcoin accounting for more than half of the market’s value, according to data aggregator CoinMarketCap. However, the market remains volatile, with Bitcoin’s value consistently fluctuating thousands of dollars, sometimes within minutes.

Buying cryptocurrency directly also comes with a host of issues unrelated to the movement of the overall crypto market. Bitcoin owners have been locked out of their wallets for forgetting their passwords, with some missing out on hundreds of millions of dollars that they have no way to reclaim.

However, despite its volatility and access issues, Bitcoin has had an undeniably impressive total return since its inception.

Bitcoin’s first major price jump was from $1 in April of 2011 to $32 in June of that same year. To date, Bitcoin’s highest peak was over $64,000 this past April, but some have predicted that the currency could reach a high of $500,000 dollars in the next five years.

Not every investor can or should expose themselves to such a volatile asset in the hopes of cashing in on a massive price jump that will most definitely come after many drastic price swings — if it comes at all. However, there are ways to decrease risk while still gaining exposure to Bitcoin and the growing digital asset economy.

According to a recent Market Watch report, while Bitcoin has had the greatest total return (322% between January 2018 and September 2021), several digital asset and blockchain-based ETFs have been significantly less volatile while still providing sizable returns for investors.

BLOK Remains Ahead of the Pack

With over $1.2 million billion in assets and a two-year return of 159% between January 17th, 2018 and September 8th, 2021, BLOK has balanced exposure to the peaks of the digital asset and cryptocurrency economy with a broad enough investment in blockchain technology to lower BLOK’s overall risk.

BLOK is actively managed, which gives the fund advantageous flexibility in the ever-evolving digital asset landscape.

Recently, BLOK sold out of its Grayscale Bitcoin Trust holdings when the share price rose high above the trust’s net asset value. The fund was able to quickly shift to hold Canadian ETFs trading closer to their NAV, reducing its exposure to volatility while maintaining exposure to the price of Bitcoin through more cost-effective vehicles.

BLOK also invests heavily in a number of bitcoin miners, many of whom have reported massive revenue increases this year.