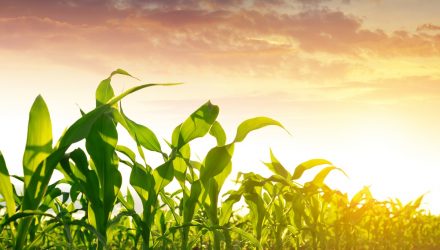 ETF of the Week: The Teucrium Corn Fund (NYSE: CORN)

“As the equity markets here in the U.S. are at all-time highs, we always want to look at other areas where we can diversify,” Lydon explained in the podcast. “Recently agriculture has been beaten up pretty badly, but there are a couple things with that in mind that those investors that are opportunistic might consider when looking at agriculture. And in this case specifically corn.”

CORN is very much a trend play right now, based on market technicals, but there are a number of fundamental reasons why investing in an agriculturally-focused ETF like CORN makes sense right now as well, Lydon added.

“Corn is just coming off of one of those long-term lows, and there may be some reasons why we might see it pop up from here. Number one: we know weather can affect the price of corn. And weather hasn’t been that great so far for this farm season. On top of that, China is really expected in this trade deal to commit to have to buy a lot of agriculture from the US, and corn is right at the top of the list. So it’s funny if you feel like we might be able to see some type of end to this trade dispute, this is one way to play it, being in agriculture, specifically the CORN ETF. The final thing is we’re seeing this population growth that’s going to continue. We’re expected to see 8.5 billion people in the world by 2030, or 78 million more people per year. Half the world reached middle class in 218, and that’s means middle class are going to be able to eat better. By eating better they’re going to be able to afford agriculture and corn and that type of thing. So it’s definitely a trend play,” Lydon explained.

Lydon warns however that there are some potentially higher associated costs with investing in futures, that an ETF may alleviate.

“You’re not investing specifically in bushels of corn or they’re not storing bushels of corn to offset your investment. It’s in corn futures. And with corn futures, there’s a monthly roll that happens with these futures; futures aren’t cheap. Sometimes they can be expensive. And with that roll, when that monthly roll goes into effect, you can actually get into an area where contango exists, and that means you’re actually paying more than what those futures are actually worth,” the ETF Trends CEO added.