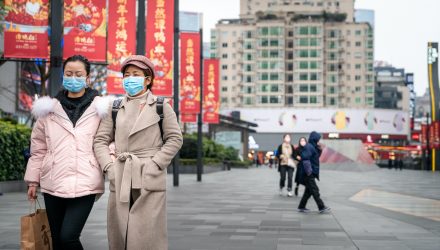 Ride-share giant Didi is undergoing a precipitous drop on Tuesday, not even a week after the Chinese app first listed on the New York Stock Exchange.

The Chinese vehicle-for-hire company, headquartered in Beijing with over 550 million users and tens of millions of drivers, saw its share price tumble 25% to a low of $11.58 in morning trading, at the most recent market close.

Didi’s fall arrives following an announcement from China late Friday that downloads for new users in the country would be halted while the company undergoes a cybersecurity review. Didi’s app was also reportedly removed from app stores.

Didi’s tumble also caused panic and a dramatic reaction from traders on Tuesday, who were stymied from buying or selling the stock on Monday as markets were closed for the Independence Day holiday. The news seemed to affect other Chinese names that are listed on U.S. stock markets as well, with Baidu falling around 4%, JD dropping approximately 3.5%, and Alibaba dipping more than 2%.

The fall in such stocks affected funds like the iShares China Large-Cap ETF (FXI) and iShares MSCI China ETF (MCHI), which fell over 2.4% apiece, and the KraneShares CSI China Internet ETF (KWEB), which tumbled over 4% Tuesday.

The rideshare app listed on the NYSE last Wednesday with a market cap of around $68 billion. Then, stock in the company climbed almost 16% on Thursday, but slipped just over 5% on Friday.

Tuesday’s tumble in Didi’s share price arrives after the Wall Street Journal reported on Monday that Didi was encouraged by Chinese regulators to delay its U.S. listing in order to review its network security several weeks before it went public.

Schaeffer explained that companies like Didi have considerable government relations departments that are regularly in contact with regulators to ensure safety and security is operating effectively.

Regulators may have failed to offer Didi “a clear directive,” she said, adding that “it is absolutely possible that Didi wasn’t really sure which way to jump and facing investor pressure they decided to just go for it.”

After years of tepid regulation, China is becoming more involved in cybersecurity. In addition to investigations into Didi, Chinese regulators have also opened cybersecurity reviews into U.S.-listed Boss Zhipin and subsidiaries of Full Truck Alliance.

Didi warned in its IPO prospectus that it could be penalized by dissatisfied regulators.

“We cannot assure you that the regulatory authorities will be satisfied with our self-inspection results or that we will not be subject to any penalty with respect to any violations of anti-monopoly, anti-unfair competition, pricing, advertisement, privacy protection, food safety, product quality, tax and other related laws and regulations. We expect that these areas will receive greater and continued attention and scrutiny from regulators and the general public going forward,” the company said in its prospectus.

While it was only listed recently, Didi got started in 2012, and claims it has 493 million annual active riders as well as 41 million average daily transactions. It began growing internationally in 2018, and the company now operates in 14 countries outside of China. The firm has invested in autonomous ride-share technology as well.

The company and its banks had assurances from Chinese lawyers that “it was fully compliant,” said an executive at one of the key investment banks.

“The CAC seems to be under political pressure to take action against Didi right now,” said Xiaomeng Lu, director of geotechnology at political consultancy Eurasia Group.

Investors looking for China ETFs to invest in could consider the Direxion Daily CSI 300 China A Share Bear 1X Shares (CHAD), and the KraneShares CICC China 5G & Semiconductor Index ETF (KFVG), both of which showed modest gains even as other China funds fell Tuesday.