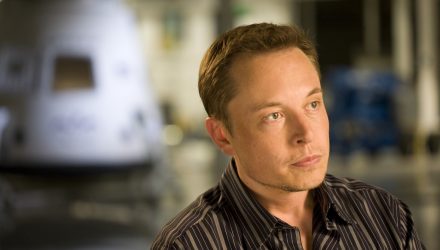 More investors are betting against electric-car maker Tesla than any other U.S. stock. However, despite their bets and Elon Musk’s ‘Bonehead’ call tweet, the top 3 ETFs with Tesla exposure are up.

Let’s take a look at how the top 3 ETFs with Tesla exposure are performing Friday as of 1:30 Eastern time according to Yahoo Finance.

According to CNCB, “The dollar amount of shares shorted on Tesla increased 28 percent in the last month to $10.7 billion, according to S3 Partners. The percentage of Tesla’s available stock currently sold short exceeds 25 percent, according to FactSet.”

What’s going on with the Model 3? Investors want to know.

Tesla’s key metric is hitting 5,00 per week and that their target for Model 3 production may not happen until late July.

Reason RBC question about Model 3 demand is absurd is that Tesla has roughly half a million reservations, despite no advertising & no cars in showrooms. Even after reaching 5k/week production, it would take 2 years just to satisfy existing demand even if new sales dropped to 0.