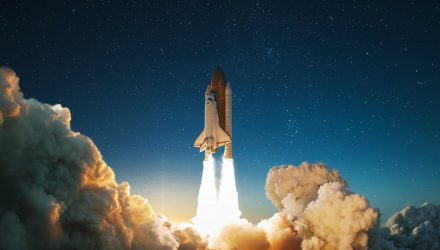 While news that Virgin Galactic (SPCE) owner Richard Branson traveled into space on Sunday, igniting excitement for eager passengers who have the financial means to purchase the ultimate adventure, shares of Virgin Galactic nevertheless fell on Monday after the company filed to sell up to $500 million in common stock. But could the flight propel space ETFs to new heights?

Virgin Galactic tumbled over 14% after it filed notice of its stock sale offering with the Securities and Exchange Commission. The moves were so volatile that trading in Virgin Galactic was briefly halted Monday morning.

According to FactSet, the space company has 240 million shares outstanding and a float, or number of shares issued for public trading, of 68.6%. As of Friday’s closing price of $49.20, Virgin’s $500 million offering would translate to almost 10.2 million shares.

On Sunday, the company successfully completed its fully crewed test flight into suborbital space, rocketing to an altitude just above 50 miles to provide Branson and his five crewmates about three minutes of weightlessness and spectacular views of Earth before descending back into the atmosphere to land at Virgin’s New Mexico launch site.

“I have dreamt of this moment since I was a kid, but honestly, nothing could prepare you for the view of Earth from space,” said an elated Branson, who is 70 years old, after landing. He added, “It was just magical. … I’m just taking it all in. It’s unreal.”

Despite Virgin Galactic’s dramatic decline, the stock is up over 80% so far this year in anticipation of this progress toward commercial service.

Analysts acknowledge the impact of Branson’s flight but are pricing the stock below the current level.

“We view Branson’s achievement as a massive marketing coup for Virgin Galactic that will be impossible for the public to ignore,” Canaccord Genuity equity analyst Ken Herbert told clients. The firm has a buy rating on the company but targeted the stock’s price at $35, even though it is currently trading over $42 per share.

The company’s spacecraft, VSS Unity, launched into the skies above New Mexico on Sunday, with two pilots guiding the vehicle carrying the billionaire founder and three Virgin Galactic employees. VSS Unity fired its rocket engine and accelerated to faster than three times the speed of sound in a climb to the edge of space.

“We see this as important on the path toward starting passenger flights, which we assume will happen in early 2022,” AB Bernstein analyst Douglas Harned told clients. The firm has a market performance rating on Virgin Galactic.

Virgin Galactic’s VSS Unity was made to ferry as many as six passengers along with the two pilots. The company has generated an immense amount of anticipation for space travel and already has about 600 reservations for tickets on future flights, sold at prices between $200,000 and $250,000 each. While passenger ticket sales have yet to be disclosed, Bernstein projects them to fall in the loftier $400,000 to $500,000 range.

Virgin Galactic also said it is joining forces with sweepstakes company Omaze to provide an opportunity to experience “one of the first commercial Virgin Galactic space flights” early next year.

“The flight is symbolically important for building consumer confidence in and demand for space tourism,” said Harned. “A successful test flight by Blue Origin, including founder Jeff Bezos, scheduled for July 20, should generate further interest in the industry, which would benefit both companies.”

While there has been heated competition in the private sector space arena, Sunday’s flight cements Branson is the first of the billionaire space company founders to ride his own spacecraft. He has faced heavy competition from Jeff Bezos and Elon Musk, however.

“To all you kids down there, I was once a child with a dream looking up to the stars,” Branson said in space. “Now I’m an adult, in a spaceship with lots of other wonderful adults, looking down to our beautiful, beautiful Earth.

“To the next generation of dreamers: If we can do this, just imagine what you can do!” he said before floating out of his seat.

While unsupportive of Virgin Galactic, AB Bernstein said the flight’s success and subsequent ticket sales could serve as a short-term catalyst for the stock to climb but did not change their long-term forecast.

UFO was the first to head to space. Launched in 2019, the fund tracks the S-Network Space Index, an index that tracks companies involved in various space-related enterprises. This includes firms involved in satellite and rocket manufacturing, satellite-based consumer services and products, space technology hardware, and space intelligence services, including imagery.

In addition, key holdings within ARKX include Trimble Inc (with 9.64% weight); the company’s own 3D Printing ETF (PRNT), with a 6.8% weight; and Kratos Defense and Security (KTOS), with a 6.51% weight.