You are at:Home»Featured»Will Inflation Become a Bigger Picture Concern? 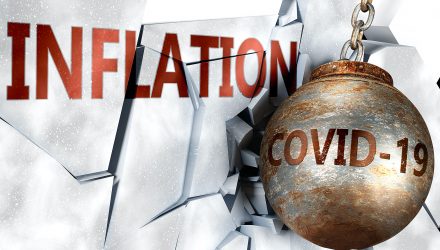 Inflationary concerns continue to affect markets, with consumer prices rising a bit more than expected in September, according to data from the Labor Department reported Wednesday.

Although food and energy price gains counteracted declines in used cars, the consumer price index for all items increased 0.4% for the month, in contrast to the 0.3% Dow Jones estimate. On a year-over-year basis, prices climbed 5.4% versus the estimate for 5.3%, making this the largest gain since January 1991.

When the index excluded volatile food and energy prices, however, the CPI increased 0.2% for the month and 4% year-over-year, versus respective estimates for 0.3% and 4%.

Stock indexes showed modest gains following the news but turned red through the morning, with only the Nasdaq remaining positive, while government bond yields fell as investors fled to safety and precious metals.

Major stock ETFs were mixed to lower as well on Wednesday. The SPDR Dow Jones Industrial Average ETF (DIA) and the SPDR S&P 500 ETF Trust (SPY) both showed losses, while the Invesco QQQ Trust (QQQ) was green as of just before 12:30 PM EST.

Gasoline prices have been surging, with places like California paying over $5 per gallon at the pump. The data on Wednesday showed another 1.2% gain for the month, bringing the annual increase in fuel costs to to 42.1%. Fuel oil spiked 3.9% for a 42.6% year-over-year surge.

“Food and energy are more variable, but that’s where the problem is,” said Bob Doll, chief investment officer at Crossmark Global Investments. “Hopefully, we start solving our supply shortage problem. But when the dust settles, inflation is not going back to zero to 2 [percent] where it was for the last decade.”

Meanwhile, used vehicle prices, which have exploded due to inflation pressures in recent months, dipped 0.7% for the month, taming the 12-month increase to 24.4%. Despite this drop, however, the continued rise in prices is causing analysts to champion the idea that inflation may be more harmful than policymakers are saying.

Other signs of rising inflation included shelter prices, which make up about a third of the CPI. Shelter prices gained 0.4% for the month and are up 3.2% for the last year period. Owners’ equivalent rent, or how much an owner of a property would be required to pay to rent it, climbed 0.4% as well, notching its greatest monthly increase since June 2006, also causing concern for analysts.

“This might just be an overshoot after a couple of relatively modest increases, but we can’t rule out the idea that the fundamentals — rapid house price gains, more aggressive landlord pricing, low inventory, and faster wage growth — are pushing up the trend,” wrote Ian Shepherdson, chief economist at Pantheon Macroeconomics.

Offsetting some of these gains, apparel prices fell 1.1% in September, while transportation services dipped 0.5%. Both sectors have been steadily climbing and still made respective annual gains of 3.4% and 4.4%.

While analysts and financial pundits are expressing concern over inflationary pressures, Federal Reserve officials have called the current climb in prices “transitory,” blaming it on supply chain and demand issues that they predict will subside in the months ahead.

“This is one more data point to say, ‘Fed, your trying to convince us that inflation is transitory is just not believable,’” Doll said. “If you know anybody who doesn’t have to live somewhere, doesn’t eat any food and doesn’t use energy, then inflation is maybe not a particular problem. But come on.”

Other experts also agree that inflation could be more insidious than the Fed is suggesting. On Tuesday, the International Monetary Fund warned that the Fed and its global peers should be readying contingency plans in case inflation is more relentless than expected. That would mean increasing interest rates faster than expected in order to stymie price gains.

Later in the day, St. Louis Fed President James Bullard said that he thinks the Fed should be more aggressive in lifting its economic support, especially its monthly bond purchases, should inflation become a greater issue and necessitate rate hikes next year. Atlanta Fed President Raphael Bostic also predicts that rising inflation could be a lingering issue, stating that the factors that have driven inflation higher “will not be brief.”

While there are still financial pundits like JPMorgan Chase CEO Jamie Dimon, who on Monday expressed that inflation could be transitory, saying that the current conditions will resolve themselves and inflation won’t be a factor in 2022, investors who are looking for ETF hedges to the problem can explore the Quadratic Interest Rate Volatility and Inflation Hedge ETF (NYSEArca: IVOL).

Also according to Quadratic, IVOL may provide a potential hedge for numerous components of an investor’s portfolio and has many applications for investors, including: