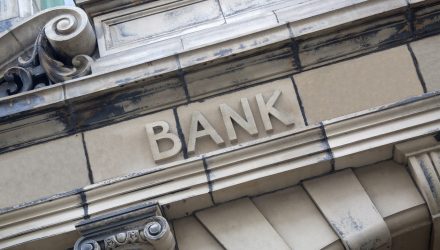 Why Bank ETFs Are Suddenly Disappointing

Financial services stocks and related bank ETFs were one of last year’s hottest sector trades and a group that started 2018 in impressive fashion, but scenario has rapidly reversed.

For example, the Financial Select Sector SPDR (NYSEArca: XLF), the largest exchange traded fund tracking the financial services sector, is down more than 3% over the past week and nearly 5% this month.

Making that scenario all the more surprising is that the Federal Reserve raised interest rates last week, prompting many market observers to speculate that as many as three more rate hikes could be coming this year. Additionally, the financial services sector, the second-largest sector weight in the S&P 500, has had the regulatory wind at its back this year as the Trump Administration has sought to roll back parts of the Dodd-Frank legislation.

Deregulation could also help the financial sector improve their margins. President Donald Trump has shown its eagerness in cutting back the red tape and remove some of the post-financial crisis regulations that has stifled the industry. The rising interest rate environment is also good for net interest margins for banks and more so for insurance companies.

“While the broader market has been hit considerably, and banks are participating in that decline, the reason behind the banks’ particular downside lies in protectionism holding down long-term growth expectations, and the flattening of the yield curve,” reports CNBC.