You are at:Home»Featured»Who Will Win The Battle For The Premier Stock Index? 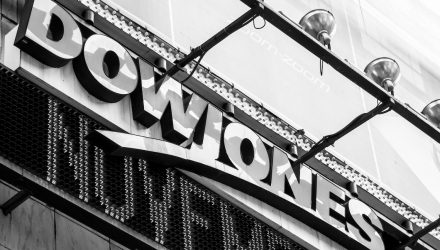 Who Will Win The Battle For The Premier Stock Index?

While it is finally showing signs of life after yesterday, the Dow Jone Industrial Average continues to lag behind the S&P 500 and Nasdaq Composite, both of which have already continued to achieve new all-time highs over the last few days. Given the recent major changes in the Dow, now traders are divided as to the index’s function as a barometer of the overall market’s health.

The Dow is making some dynamic moves, including replacing longtime constituent Exxon Mobil with cloud computing behemoth Salesforce, which has been in the news lately for its robust performance. But the long-time index is doing so out of necessity.

With moves such as Apple’s upcoming 4-for-1 stock split, the index’s technology exposure will increase from 20.3% from 27.6%, in a time when the tech trade is thriving.

Thus, augmenting the index with Salesforce brings that tech exposure back up to roughly 23.1%. The Dow is also replacing Pfizer with Amgen, elevating its health-care exposure to 18.6% from 14.2%, and switching Raytheon Technologies for Honeywell.

“To be added to the Dow is a historic thing, so, I think it certainly bodes well for the companies and, if nothing else, just investor psychology,” Quint Tatro, chief investment officer at Joule Financial, told CNBC’s “Trading Nation” on Tuesday.

“It sometimes brings great credibility,” he said. “Now, whether that’s a fundamental rationale or bodes well for the stock price is sort of yet to be determined.”

“It’s fun to talk about and obviously it’s reflective of a market that’s booming and is moving up, but really, I think it’s more a factor of mathematics,” he said in the same “Trading Nation” interview. “They’re just bringing some companies in that are trying to be reflective of the overall economy.”

Keying too much on the Dow itself wouldn’t be wise considering the import of another major average which is having its day in the sun, Gordon added.

“You talk to any trader on the Street, any real investor, any institutional money manager, [they’re] always tracking the S&P 500,” he said. “The big futures in Chicago where they trade it on the floor, that’s the heart of the S&P market. The 500 cash stocks, the 500 largest market caps, those are the real drivers of what’s happening here. So, I just don’t want people to get too caught up in what’s happening in the Dow. Realize the S&P is the barometer that you want to be looking at.”

Still, Tatro feels the Dow is extremely relevant, and that “the average investor on Main Street speaks in the Dow.”

“I agree that long term in the averages we always talk about performance in relation to the S&P, but you ask any Main Street investor and they know that Dow is headed to 30,000 and that’s an important milestone,” Tatro said. “That’s a psychological number. So, they still speak Dow on Main Street for sure.”

The S&P has outperformed the Dow over the last one, two, three, five, and 10 years. However, the Dow has the long term advantage, outperforming its sibling over the last 20, 30, and 40 years. Stocks are pulling back on late afternoon Wednesday, after surging to new highs in the S&p 500 and Nasdaq Composite, lifting the SPDR S&P 500 ETF Trust (SPY), and the Invesco QQQ Trust (QQQ) as well.

Investors interested in using ETFs to play the Dow can look into the ProShares Ultra Dow30 (DDM) and the First Trust Dow 30 Equal Weight ETF (EDOW).