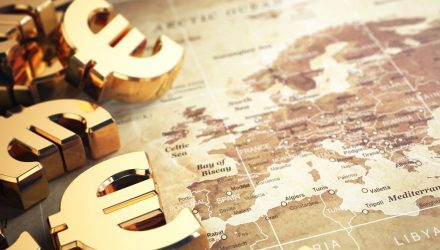 Since March 2015 , the European Central Bank (ECB) has retained its program of public debt purchases, commonly referred to as quantitative easing (QE).

In the most basic terms, this is equivalent to the central bank increasing the money supply. The goal is to boost the economy by adding liquidity to capital markets, keeping interest rates low.

The eurozone – comprising the 19 countries that use the currency – adopted this program late, seven years after the US and three after Japan. Austerity had been the norm up to that point, mostly at the behest of Germany, the biggest economy in the group.

The president of the ECB had, however, assured markets back in 2012 that the monetary authority was ready to defend the currency by buying bonds from debt-laden countries at a time when there were serious doubts about the survival of the euro. Although these purchases never materialized, markets reacted and the yields came down (see figure 1).

QE programs should, all else equal, depreciate the value of the currency – making exports more competitive – and push up inflation (e.g., making imports, like oil, more expensive).

What happens when every major central bank is doing the same may turn out to be, of course, a very different story.

In fact, in the last few weeks we have seen the euro gaining ground against the dollar, reaching levels unseen since early 2015 (see figure 2). The euro has risen by more than 12% against main trading currencies this year, while the dollar is at a 33-month low.

Clearly, a loose monetary policy has not been enough to weaken the euro with respect to other major currencies.

2. Recent announcements and our assessment

Mario Draghi, the president of the ECB, recently stated that the central bank will reconsider its QE program in October, postponing once again a decision as to when the program will come to an end. In addition, he said the program would be kept in place at least until December (when it officially expires).

This means it will probably continue into 2018, even if at a slower pace. Analysts expected an announcement in June, at the ECB Forum in Sintra (Portugal).

Likewise, no news came out of Jackson Hole last month, when central bankers held their yearly meeting. The head of the German central bank (Bundesbank), for example, has been very explicit about wanting the program to end, in light of the economic recovery seen so far.

The QE program of the ECB consists of EUR 60 billion per month in bond purchases, and at least EUR 2.3 trillion ($2.7 trillion) will be spent by its end.

However, now that the eurozone is as strong as it has been in the last decade, with confidence running high, unemployment receding (not everywhere though), and exports at good levels, many have been left wondering why the ECB still won’t let go of its stimulus program.

Additionally, interest rates are currently at zero. They have been since March 2016, and were almost zero for many months before. This means that, currently, the ECB does not have many tools to face another crisis.