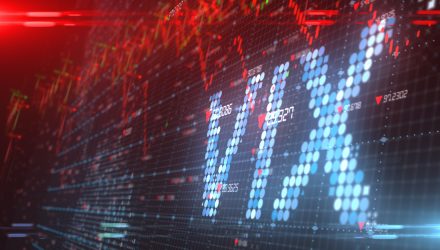 The Dow Jones Industrial Average plunged almost 1100 points, or 3.1%, losing ground for a seventh consecutive session. The S&P 500 was pummeled 3.8%, down over 10% from its intraday high, while the Nasdaq Composite dropped another 4.5%, falling deeper into correction territory.

Major stock ETFs that tumbled on Monday included the SPDR Dow Jones Industrial Average ETF (DIA), the SPDR S&P 500 ETF Trust (SPY), and the Invesco QQQ Trust (QQQ), which were all down more than 3% as of 12:30 PM EST.

Monday’s price actions arrives after a rough last week, with concerns over mixed company earnings and ongoing fears about rising interest rates and, most recently, a potentially new Omicron strain.

French Health Minister Olivier Veran said on Thursday that the new Omicron variant, BA.2, did not look as if it would be a major issue, as variants appear on the scene “fairly regularly” and BA.2 “more or less corresponds to the characteristics that we know of Omicron,” but he implied that he would withhold judgement for the time being.

Monday’s tumble drove the benchmark S&P 500 off by 11% this month, on pace for its worst January performance in history. The Dow was also on target for its biggest one-month loss since March 2020, losing over 8%. The Nasdaq, meanwhile, has plunged nearly 16% in January and is headed for its worst month since the financial crisis of 2008, when it plunged 17.7% in October.

All of this movement has seen a spike in the CBOE Volatility Index (VIX), known on Wall Street as the market’s “fear gauge,” which reached its highest level since November 2020, cresting the 38 level. The gauge is up 16% alone on Monday.

Investors looking to use ETFs to trade the VIX as it moves higher over the short- or long-terms can look to the iPath Series B S&P 500 VIX Short Term Futures ETN (NYSEArca: VXX) and the ProShares VIX Short-Term Futures ETF (NYSEArca: VIXY), along with the CBOE Volatility Index. Potential investors should keep in mind that VIX-related exchange traded products track VIX futures and not the spot price. Notably, the VXX surged roughly 7% Monday, amid a move higher in the underlying index.

Meanwhile, for traders who see an end to the recent decline and stocks continuing to head higher, the ProShares Short VIX ETF (SVXY) climbs as the VIX falls. According to the fund’s profile, “The investment seeks daily investment results, before fees and expenses, that correspond to one-half the inverse (-0.5x) of the performance of the S&P 500 VIX Short-Term Futures Index for a single day. The index seeks to offer exposure to market volatility through publicly traded futures markets and is designed to measure the implied volatility of the S&P 500 over 30 days in the future.”

While impending stimulus cuts have sparked market worries, mixed fourth-quarter earnings results have also contributed to the decline. While over 74% of S&P 500 companies that have reported results have beaten Wall Street estimates, a couple of critical player such as Netflix and Goldman Sachs have disappointed investors and traders.

“What had initially been a stimulus withdrawal-driven decline morphed last week to include earnings jitters,” Adam Crisafulli, founder of Vital Knowledge, writes in a note. “So investors are now worried not just about the multiple placed on earnings, but the EPS (earnings-per-share) forecasts themselves.”

Investors are awaiting a plethora of key earnings reports from big tech companies this week, which could all be market-movers. Microsoft dropped 5.3%, Apple fell 4.4%, and Tesla tumbled 9% ahead of the quarterly reports, with most of the market bathed in red on Monday.

As investors prepare for the Fed to tighten monetary policy, risk assets like stocks and crypto have come under pressure. Bitcoin tumbled another 8% over the weekend, eliminating nearly 50% of its value from crypto’s peak last year.

Investors are now anxiously awaiting the Federal Reserve’s policy meeting, which concludes on Wednesday, for any indications of how much the central bank will increase interest rates this year and when it will commence.

The Federal Open Market Committee indicated that the first of multiple rate hikes could begin in March. In addition, the Fed is expected to finish its monthly asset purchase program in March as well.

Many analysts are concerned about the effects that Fed policy could have on the market.

“The big story so far in 2022 has been the rapid move higher in interest rates, which is prompting investors to re-assess valuations for some of the most expensive segments of the market and rotate into value stocks,” said David Lefkowitz, head of equities Americas at UBS Global Wealth Management.

“Until we get a further selloff in risk assets, the Fed will simply not be convinced that raising interest rates and reducing the size of its balance sheet in 2022 will more likely cause a recession rather than a soft landing,” Nicholas Colas, co-founder of DataTrek Research, wrote in a note on Monday.

“Either outcome would dampen inflation, of course, which is why 10-year Treasury yields have stopped climbing,” Colas added. “But only a soft landing would allow public companies to continue to post strong earnings. The risk of a hard landing is why U.S. large caps are under so much stress.”

Still, not all analysts are bearish on stocks right now, though. JPMorgan’s top stock strategist, Marko Kolanovic, said in a note Monday that the sell-off may be overdone and a bounce is due.

“The recent pullback in risk assets appears overdone, and a combination of technical indicators approaching oversold territory and sentiment turning bearish suggest we could be in the final stages of this correction,” Kolanovic said. “While the market struggles to digest the rotation forced on it by rising rates, we expect the earnings season to reassure, and in a worst case scenario could see a return of the ‘Fed put.’”