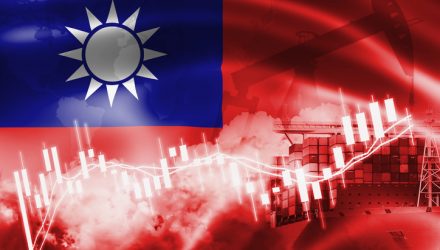 Trade tensions between the U.S. and China are weighing on Taiwanese stocks as highlighted by a month-to-date decline of more than 3% for the iShares MSCI Taiwan ETF (NYSEArca: EWT). While EWT has struggled in recent weeks, there may be an opportunity with the largest Taiwan ETF.

The $3 billion EWT, which tracks the MSCI Taiwan 25/50 Index and recently turned 19 years old, holds 89 stocks. Its potential sensitivity to global trade wars is understandable because the fund allocates nearly 52% of its weight to technology stocks. Alone, Taiwan Semiconductor (NYSE: TSM) accounts for over 22% of the fund’s weight.

“On the charts, EWT has had a volatile run, the equity recently gapping lower and back below its supportive 80-day moving average. While the shares have managed to climb higher over the past few days thanks to support from the $33 floor, they remain below the aforementioned trendline, and sport an underwhelming 8% year-to-date gain,” according to Schaeffer’s Investment Research.

Stuck In The Middle With Taiwan Trade Talk

To some extent, Taiwan has been caught in the middle of the US/China trade spat, but EWT’s performance indicates Taiwan is flexing its independence rather than siding with China as China would prefer.

While Chinese President Xi Jinping supports the notion that China and Taiwan must stand together unified, the U.S., on the other hand, supports the country’s efforts to stay independent. Chinese officials, however, have openly stated that military force is an option to maintain unity between the two nations.

Related: Investors Can Look to “EWT” Taiwan ETF as an Option Amid Trade Wars

For example, Bank of America and Merrill Lynch economists predict Taiwan, Vietnam, and South Korea have the most to gain, given the countries’ similar export profiles to China. Options market data some traders have been stepping into EWT.

That’s a direction neutral indicating the trader is protected on either side.