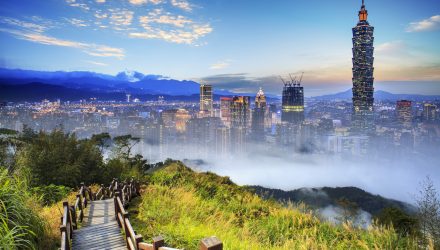 The U.S.-China trade impasse could put Taiwan into the forefront, according to Zhiqun Zhu, a professor of political science and international relations at Bucknell University. Zhu said Taiwan could be used as a major “chess piece” for the U.S. in ongoing trade negotiations, which could put the iShares MSCI Taiwan ETF (NYSEArca: EWT) in play.

“Taiwan’s value to the U.S. will only increase as tensions between the U.S. and China escalate,” Zhu told CNBC.

While Chinese President Xi Jinping supports the notion that China and Taiwan must stand together unified, the U.S., on the other hand, supports the country’s efforts to stay independent. Chinese officials, however, have openly stated that military force is an option in order to maintain unity between the two nations.

“If anyone wants to separate Taiwan from the country, the Chinese military will resolutely defend the unity of our motherland at all costs,” said Chinese Lieutenant General Shao Yuanming.

China can certainly play the long game in trade negotiations as the trade impasse with the United States didn’t seem to affect it in May as the country’s overall trade surplus was about $42 billion–double the $20.5 billion expected by economists polled by Reuters. The data comes just as the International Monetary Fund (IMF) lowered the growth expectations for China through the rest of the year.