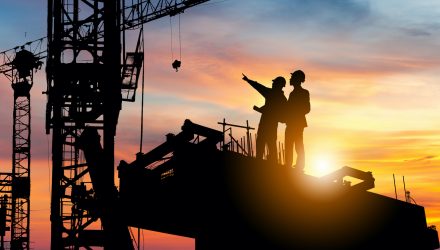 Infrastructure stocks and ETFs are benefitting from news that the House of Representatives passed a $1 trillion bill over the weekend, checking off a major milestone for President Biden and generating enthusiasm for investors who supported his plan.

Late last Friday, the House of Representatives passed the bill for which prospects had been tenuous since its passage in the Senate over the summer. The bill moved on to the President over the weekend for his sign-off and is a massive boost in funding for utilities, transportation, and internet improvements and access.

“Finally, infrastructure week,” Biden said, chuckling over what had become a running joke about his predecessor, who failed to ever make a deal on the investment needed for the nation’s roads and ports despite often promising to focus on the problem. “I’m so happy to say that: infrastructure week,” he said.

“The week started rough for Biden, but the [infrastructure] win and great jobs numbers shows the path by which Biden can turn this around,” said Jennifer Palmieri, who worked in the Obama White House.

Economists and financial experts have been excited by the news, projecting a stellar end to the year.

“The economy is certainly picking up some momentum,” JPMorgan’s David Lebovitz said on Friday on CNBC’s “Squawk on the Street.” “We are expecting economic growth to accelerate here into the end of 2021 and the beginning of 2022.”

The news comes amid climbing inflation and is a welcome respite from higher price concerns. Inflationary data is due out Wednesday with the CPI report from the BLS, and still could cause some disruption to markets, but should eventually be balanced out, according to economists.

“We continue to expect that a normalization of demand and supply constraints over time will take pressure off inflation statistics,” Rubeela Farooqi, chief economist for High Frequency Economics, wrote in a note on Monday. “The exact timing is uncertain, given we cannot predict when supply chains will adjust.”

“However, our best guess is that prices will start moderating by the middle of next year — possibly sooner if goods that are stuck off ports reach their destinations in the early part of the year, which will result in an excess supply of goods after the holiday,” Farooqi added.

One infrastructure ETF benefitted following the passing of the bill: the Global X US Infrastructure Investment ETF (PAVE). The fund added 1.5% and notched an all-time high in the opening minutes of the session. The ETF’s top holdings include stocks like Nucor and Vulcan Materials, which moved solidly higher on Monday morning.

The need for significant infrastructure spending has spurred major discussions in Washington for years, but efforts had been tepid since last week.

“Investors have waited for a significant step-up in infrastructure spending for decades, and from Obama’s ‘shovel-ready projects’ to Trump’s ‘infrastructure week’ they have largely been disappointed. Accordingly, we view this generational investment as a significant catalyst for growth for a number of our stocks,” Citi’s Anthony Pettinari said in a note to clients.

United Rentals, another large component of PAVE, added 2% in morning trading on Monday and could see further gains thanks to the new bill, Bernstein analyst Chad Dillard said in a note to clients.

“With >$500B of incremental infrastructure spend committed, contractors’ ability to take on additional work will be limited by their balance sheets, which will incentivize more rental than equipment purchase. URI is best positioned to benefit,” the Bernstein note says.