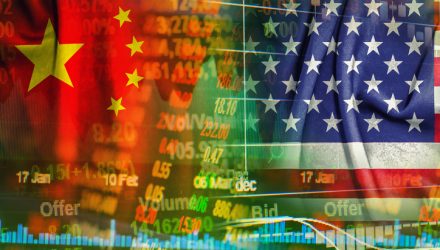 At a time when trade tensions between the U.S. and China are running high, pressuring stocks in both countries, considering Chinese stocks (particularly those in cyclical sectors), may seem like a bold idea. Indeed, the Global X MSCI China Consumer Discretionary ETF (CHIQ) is lower by 8% over the past week, but that doesn’t mean investors should ignore this fund.

CHIQ’s underlying index “incorporates all eligible securities as per MSCI’s Global Investable Market Index Methodology, including China A, B, and H shares, Red chips, P chips, and foreign listings, among others,” according to Global X.

CHIQ is heavily allocated to Chinese Internet stocks, a group that has been punished by the trade war and one that has seen valuation compression.

“Some investors aren’t happy about that, and it has shown in the contracting valuation of China internet stocks,” reports Evie Liu for Barron’s. “Since 2018, the group’s valuation has been declining and now trade at about 22 times earnings, lower than its 10-year average and only slightly more expensive than the period between 2008 to 2010, before mobile internet became ubiquitous.”

“China is no longer just a story about earnings growth, wrote Jefferies analyst Thomas Chong in a Monday note, as the economy enters a third development phase where companies’ ability to sustain long-term value is also a key investment consideration,” according to Barron’s.

Related: China Tech ETFs to Consider As Trade Talks Could Drag On

Jefferies started coverage of 25 Chinese internet stocks earlier this week, including 18 with “buy” ratings and five with “hold” marks.

“Chong believes investors will pay more attention during this earnings season to management’s tone on forward-looking business trends, instead of being overly focused on the past quarter performance,” notes Barron’s.

The $138.73 million CHIQ allocates over 15% of its combined weight to Alibaba (NYSE: CHIQ) and JD.com (NASDAQ: JD), two of the higher quality Chinese internet stocks.