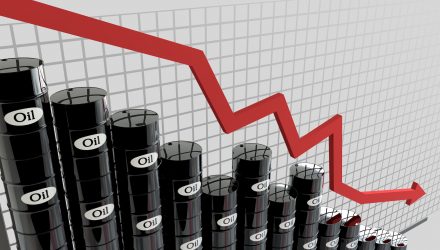 Crude oil is plummeting today amid news that countries part of the OPEC+ group are discussing the concept of slashing oil production from May to July, Russian news agency TASS reported on Tuesday, citing two sources at OPEC.

“Three months. I believe the deal can be made from May because April deliveries have already been scheduled,” a high-ranking source in OPEC told TASS, while another source noted that a potential production cut would be “definitely longer than until June.”

Crude oil has dropped 8% so far on the news, with West Texas Intermediate crude selling off steeply from $27.24 to around $23.60 a barrel.

Crude oil ETFs have also been in the red with the selloff. Oil ETFs relinquished even more of the incredible gains made last week, with the  United States Oil Fund LP (USO) falling 9.31%, while leveraged fund, ProShares Ultra Bloomberg Crude Oil (UCO) dropped 18.65% as of 2:30 PM Eastern time Tuesday.

Russia’s energy ministry has been offered an invitation from OPEC to participate in Thursday’s video conference, and Russia confirms it will be a participant in that meeting, an official at the energy ministry told TASS on Tuesday.

The leaders of the OPEC+ group, Saudi Arabia for OPEC and Russia for non-OPEC, are reportedly also ready to initiate a substantial global production cut amid falling demand, even as animosity continues between Russia and Saudi Arabia.

On Monday the U.S. Department of Energy said that Secretary Brouillette took part in a “productive discussion” with Saudi Arabia’s energy minister concerning the “ongoing challenges and instability in global oil markets.” According to the statement, the two energy ministers decided to “continue this dialogue through a G20 Energy Ministers meeting in the near future.”
Some analysts are now skeptical of whether or not the deal will come together and are projecting more downside for crude oil.
“It’s probably going to crater,” Again Capital’s John Kilduff said of oil. “There was a lot of optimism priced into oil Thursday and Friday. With this new Saudi, Russia spat, it doesn’t look like it’s going to come together.”
For ETF investors who are using short oil ETFs to play the downdraft, the ProShares UltraShort Bloomberg Crude Oil (SCO) was up more than 18.3% Monday, as bearish oil investors capitalized on the downtrend.
For more market trends, visit  ETF Trends.