You are at:Home»Thematic Investing Channel»Automaker, Transport ETFs Fall as GM Works to Control Operations in China 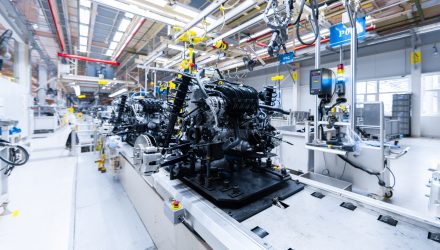 With the coronavirus contagion still continuing to spread, automakers like General Motors are working feverishly to re-initiate manufacturing in China while deterring operations elsewhere from being affected by supply shortages.

The American multinational vehicle corporation confirmed Friday that it is closely controlling the supply chain for its highly lucrative truck production in North America. Spokesman David Barnas said in an emailed statement that the automaker “does not anticipate any impact on full-size truck production at this time.”

The automaker doesn’t anticipate having to limit production at plants in Michigan, Indiana and Texas, according to Barnas. He made the remark after a United Auto Workers union member at its heavy-duty pickup factory in Flint, Michigan, said the threat of parts shortages at the facilities is broadening.

“We continue to monitor our supply chain and are in close communications with our tier-one suppliers to mitigate any risk to production in North America,” Barnas said in an email. “The situation is still quite fluid, but GM, other automakers and suppliers have begun the process of restarting vehicle and parts production in China.”

GM shares dropped more than 2% while Fiat Chrysler dropped as much as 1.5% as of 1:15 p.m. EST Friday, amid a general decline in stocks as well, following new overnight highs.

The news has been affecting automaker and transportation ETFs as well, driving them down in Friday’s trading.

The First Trust Nasdaq Transportation ETF (FTXR), which has a healthy 8% allocation of General Motors is down 0.63%, while the auto-centric First Trust Nasdaq Global Auto Index Fund (CARZ), also with considerable GM holding, is down just over 1% today.

However, the automaker did report that pretax profit resulted in $2.8 billion, or $1.43 a share, which bested the average analysts’ estimate of $1.24 a share. GM cited strong pricing on pickup trucks and crossover SUVs in North America as key drivers in sales.