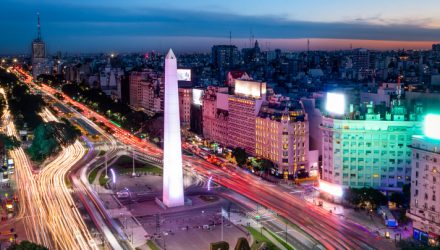 Down almost 32% over the past month, the once high-flying Global X MSCI Argentina ETF (NYSEArca: ARGT), the largest US-listed ETF dedicated to stocks in Latin America’s second-largest economy, is beset by political volatility.

One glimmer of hope for the Argentina ETF is its largest holding, online retailer and e-commerce giant MercadoLibre (NASDAQ: MELI). While note immune to Argentina’s political volatility (the stock is down 20% over the past month), MercadoLibre still has the makings of a winner, according to some analysts. That’s a relief to ARGT investors because the ETF allocates 22.39% of its weight to MercadoLibre, according to Global X data.

“Argentinian primary election results and that decline represents a good entry point for investors, BTIG’s Marvin Fong said in a note to clients late Monday upgrading the stock of the Latin American e-commerce giant to Buy from Neutral,” reports Ben Walsh for Barron’s.

Argentine equities recently inched up after currency controls were implemented to restrict the purchase of the U.S. dollar and stabilized the Argentinian peso currency on Monday. The center-right government of President Mauricio Macri announced currency controls Sunday to stabilize the country’s deepening financial crisis, DW reports.

The newly imposed capital controls helped stabilize markets that have plunged to record lows since Macri, whom came to power as a free-market champion, was handily beaten in a primary vote last month, smothering hopes of a re-election in October. The subsequent market crash saw the peso depreciate 26% of its value against the U.S. dollar since August. Meanwhile, the country’s risk index surged and bond prices plummeted to record lows as well.

“A reasonable decline for the shares would have just about $70, Fong argued based on the 48% fall in the dollar-denominated value of Argentina’s stock market since the primary. That’s far smaller than the $120 drop that the shares have been hit with,” according to Barron’s.

In other words, the most important stock in ARGT may have declined too much too quickly and if traders step back into the e-commerce name sensing a bargain, ARGT is poised to benefit.