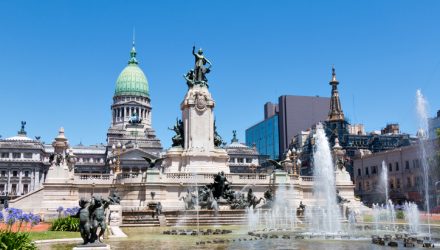 On Thursday, the Global X MSCI Argentina ETF (NYSEArca: ARGT) advanced 3.4% and the iShares MSCI Argentina and Global Exposure ETF (AGT) increased 3.0%. Despite the two-day gains, the Argentina ETFs are close to 30% off their early August highs.

“After the abrupt collapse, Argentine assets are warming up for a technical rebound as traders look to selectively take some positions by betting on the excessive accumulated weakness (of bonds and stocks),” economist Gustavo Ber of local firm Estudio Ber told Reuters.

The Latin American market rebounded this week after currency controls were implemented to restrict the purchase of the U.S. dollar and stabilized the Argentinian peso currency on Monday. The center-right government of President Mauricio Macri announced currency controls Sunday to stabilize the country’s deepening financial crisis, DW reports.

The “extraordinary measures” include limiting Argentinians from exchanging more than $10,000 per month, along with requiring government permission to transfer money abroad.

Despite the measures, many were concerned about being blocked from taking their money out of banks, such as what happened during Argentina’s economic crisis of 2001.

The newly imposed capital controls helped stabilize markets that have plunged to record lows since Macri, whom came to power as a free-market champion, was handily beaten in a primary vote last month, smothering hopes of a re-election in October. The subsequent market crash saw the peso depreciate 26% of its value against the U.S. dollar since August. Meanwhile, the country’s risk index surged and bond prices plummeted to record lows as well.

Given the current market environment, economists projected an average inflation rate of 55% for the year and reduced the outlook on the economy to a 2.5% contraction.