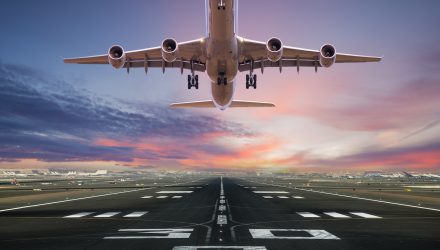 With markets getting pummeled once again, in what is quickly becoming the most serious economic debacle since the financial crisis, now U.S. airlines are struggling with potentially having to curb all commercial domestic air travel, as worries about the spread of the coronavirus has damaged demand for flights.

While it is still uncertain as to whether the administration will take that dramatic action, which would represent the first time the U.S. implemented a travel ban since the wake of the Sept. 11, 2001, attacks, or just how long the ban would last, there are already a plethora of other corporations and industries that are suffering a similar fate, including amusement parks, restaurants, and stadiums.

There are already travel restrictions in place for international travel, the latest of which includes the UK, but the newest thoughts involve domestic travel. Airlines around the globe are scrambling to hoard cash as demand for flights tumbles after political leaders turn to increasingly more austere measures that have disrupted daily life in an effort to stop the spread of COVID-19.

While well-known amusement parks like Disneyland have been closed to park-goers, and most recently Apple announced they will be closing all stores outside of greater China for the better part of the month of March, now President Trump is pondering a travel ban on areas that are hard hit by the coronavirus.

The president, speaking on Saturday, said he is considering additional travel restrictions to areas most affected by the coronavirus, which now has infected nearly 170,000 across the world and killed more than 6,500, according to data compiled by Johns Hopkins University. In the U.S., it has spread to roughly 3,800 and killed at least 69, according to Hopkins.

In response to the possible incoming bans, Southwest said on Monday that it is curbing last-minute fares to $199 one way for tickets purchased this week. American, United, and Delta last week instituted similar fare caps for travelers rushing to get back to the United States ahead of Europe travel restrictions and pop in cases abroad.

On many routes, the last-minute prices are even lower since a perilous drop in travel demand has airlines cutting fares across the board.

Meanwhile, transportation ETFs like U.S. Global Jets ETF (JETS), which is currently the only pure-play airline ETF available, investing primarily in domestic airline companies and companies involved in the airline industry, as well as a handful of international offerings, is struggling to say the least. JETS, a multi-cap ETF, weighted predominantly toward large-cap companies, is currently down 12% Monday and nearly 50% over the last month.