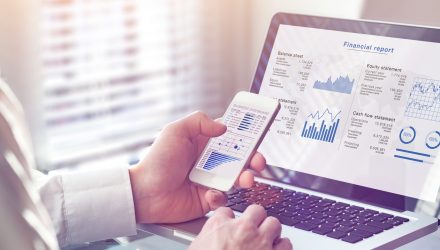 After the closing bell on Monday, Alphabet reported its fourth-quarter and full-year financial results, which showed that the company’s revenue grew from $39.3 billion in 2018 to $46.1 billion in 2019. The firm’s net income also expanded from $8.9 billion to $10.7 billion over the same time frame.

However, the numbers, when compared to expectations, were mixed. Alphabet bested analyst estimates on profit, but missed on revenue. As a result, shares of the company were off around 4% in after-hours trading, following its disclosure, and are still down over 3% as of nearly 2 pm EST Tuesday.

While stock and ETF investors may be concerned, several analysts are confident in the viability of the tech giant as an investment.

Charles Bobrinskoy, vice chairman at Ariel Investments, claims that Alphabet is a company you can count on.

“This is not Tesla. This is not smoke and mirrors. This is a very good business with operating cash flow that’s getting better. Those 20% margins are a lot better than a lot of advertising agencies. So, this is one I would not get in the way of. Some of these I think are destined to fall. This is a very real business, growing in a lot of different ways with more disclosure that we of course love. I would not get in the way of this.”

Jeff Saut, chief investment strategist at Capital Wealth Planning, is confident that the company has plenty to offer investors as well.

“In terms of Google, I’ve been bullish on Google since it became public. In fact in my presentations at public seminars I asked the people, ‘How many of you used Google before it became public?’ And all the hands go up, and I said, ‘Why didn’t you buy the stock?’ I mean that’s pure Peter Lynch stuff there. And I think Google’s got a great business model, and I think it’s a great company.”

Brent Thill, managing director and senior analyst at Jefferies, noted that Alphabet is becoming more transparent in their reports.

“They added transparency. The stock would be lower given the revenue miss if they didn’t have more transparency, and this has been the single biggest thing tech investors have been pushing Google for. … They bought $7 billion of stock back. It’s been their largest buyback ever. They’ve $20 billion left now on the buyback plan. There’s inches now — not gaining miles but inches — of becoming more shareholder-friendly. We think that is a very good thing for a stock that trades at 11 times EBITDA.”

Investors looking at ETFs with healthy allocations of Google can consider the these 2 ETFs: