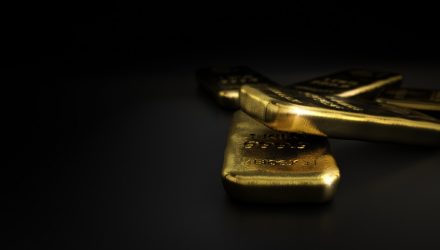 Gold prices are busting higher with gains of over $24 an ounce to $1532.10 in late-morning trading Friday.

The U.S.-China trade war has taken a turn for the worse after China announced new trade tariffs on the U.S., while President Trump retaliated in a series of threatening tweets that included one demand that U.S. businesses stop doing business with China. Trump also posed to followers in a tweet who was the bigger enemy: China’s President Xi or the Federal Reserve, following Fed Chairman Powell’s comments at Jackson Hole. All of this has terrified investors in the marketplace heading into the weekend, driving them into safe-havens like gold.

China claimed it was readying to elevate tariffs in two tranches on $75 billion in U.S. imports on Sept. 1 and Dec. 15, which would correspond with the dates that Washington is scheduled to increase import duties on some $300 billion of Chinese goods.

The tariff news from China “helps to play into placing more pressures on the [Federal Reserve] to be more accommodative and easy during the growing rise in trade wars in the coming months, so gold will benefit from this into next week,” Peter Spina, president and chief executive of GoldSeek.com

Remarks from Fed Chairman Jerome Powell who was meeting at the Jackson Hole Wyoming, economic policy symposium, meanwhile, sounded “accommodative to easier monetary policies” going forward, and lower interest rates would be bullish for gold, said Spina. “When and how fast still seems unclear so the market may no respond too bullishly just yet.”

According to Michael Boutros, Technical Strategist at DailyFX.com however, “Gold prices are trading into a critical long-term resistance threshold with news of retaliatory tariffs from China sparking a massive surge in prices. The advance is once again looking to challenge this key pivot zone and a breach / close above is needed to keep the long-bias viable.These are the updated targets and invalidation levels that matter on the XAU/USD charts.”

The SPDR Gold Shares (GLD)  is currently up about 2%, but traded about flat for the week, while the VelocityShares 3X Long Gold ETN (UGLD) is up almost 6% Friday.