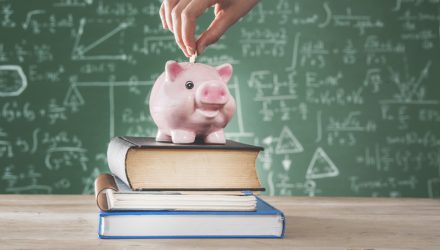 HYD seeks to replicate as closely as possible, before fees and expenses, the price and yield performance of the Bloomberg Barclays Municipal Custom High Yield Composite Index, which is intended to track the overall performance of the U.S. dollar denominated high yield long-term tax-exempt bond market. HYD is expected to pay monthly dividends.

As investors struggle to digest the implications of the Fed decision to cut rates, and how extensive those cuts will be, bonds become more attractive as an option that has potentially higher yields than other instruments.

“Well you and I have talked a little bit about fixed income,” Lydon said in the podcast. “We haven’t really talked about munis, but the same principles apply. This week we saw the Fed move again and maybe indicate that they have additional moves within them, as far as rate cuts between now and the end of the year. That’s really really positive for the bond market. Obviously lower interest rates mean that the current bonds that are on the market are going to offer more attractive yields. So we’ve actually seen in this move to new lower interest rates and dovish Fed, appreciation in fixed-income markets, and specifically ETFs. And that’s also had a positive effect on the municipal market.”

One often overlooked benefit of bonds is the added tax incentive they provide, says Lydon. Getting a higher yield and enhanced tax effects is significant to many investors, making municipal bonds especially enticing.

“Now municipal bonds have that added tax provision, being able to write that off on your taxes today when a lot of write-offs have been under fire, especially from the current government, as far as limitations and that type of thing. So there’s more demand for municipal bonds today. At the same time, we’ve seen with this positive momentum as far as the economy and the environment, municipalities have also benefited from that Chuck, in the way that that’s come down to them in a positive way where state and local governments have retained more cash, diminishing their need to borrow more money, and ultimately reducing the already low risk of default. All that means is that munis are attractive right now, and the yields ultimately from an after-tax standpoint are attractive too. This is a high-yield municipal where it’s actually taking advantage of lower rated municipal bonds within the index, ultimately providing a yield that’s 4.2% from a municipal standpoint, which is really attractive,” he added.