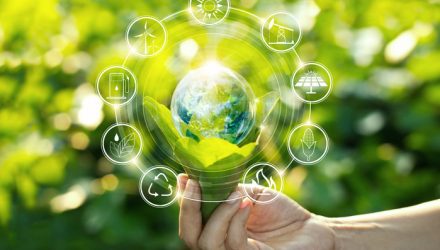 Another Big Year Could be Looming For Renewable Energy ETFs

Some of this year’s best-performing industry ETFs provide exposure to alternative and renewable energy companies. For example, the ALPS Clean Energy ETF (Cboe: ACES) is higher by nearly 41% year-to-date.

ACES and rival renewable energy ETFs could be poised for more upside in 2020 as demand for and adoption of clean energy is expected to increase.

“Solar and wind power are among the renewable energies forecast to spike in 2020, accounting for two-thirds of the new power generation capacity comings on line, a new report shows,” reports Cecilia Jasmine for Mining.com. “Experts from The Economist Intelligence Unit (The EIU), forecast energy consumption from non-hydro renewables to rise by 14% next year, while oil-generated energy would grow by just 1%, even with prices remaining range-bound despite political tensions in the Middle East.”

“The study highlights that the Paris Climate Change Agreement will use 2020 as the base year against which the 2030 targets will be measured,” according to Mining.com. “However, the experts predict that those targets will likely to be missed, particularly if the United States goes ahead with its plan to exit the agreement.”

In terms of adoption by big American companies, wind and solar are two of the preferred avenues for clean energy use and that’s relevant to ACES because those themes combine for a significant percentage of the fund’s roster.