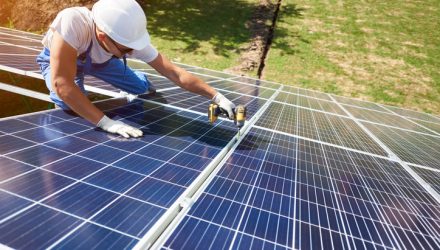 Solar stocks and sector exchange traded funds have brightened up this week after an attack on Saudi Arabia’s oil production raised questions over the world’s reliance on fossil fuels, along with signs of ongoing growth in the solar industry.

The Invesco Solar ETF (NYSEARCA: TAN) was among the best non-leveraged ETF performers on Thursday, rising 2.9%. TAN also strengthened 4.5% over the past week on the heels of a spike in crude oil prices.

Attacks on Saudi Arabia’s oil facilities over the weekend disrupted half of the Kingdom’s overall crude production or 5% of the world’s global supply. As crude oil prices spiked, investors may have turned to solar energy as a potential alternative.

Along with the macro worries over oil, the solar industry is also enjoying strengthening fundamentals, with increased demand for solar panels. According to Wood Mackenzie Power & Renewables research, the portion of U.S. large-scale solar pipeline attributed to commercial and industrial offtakers continues to expand, GreenTechMedia reported.

“In an industry where we’re seeing continued year-over-year growth, to have corporate market share grow even faster than that is quite impressive,” Smith said.

The contracted pipeline of utility-scale solar follows a record-high procurement of 15 gigawatts in 2018 with over 6 gigawatts of solar capacity added to the five-year forecast since last quarter, CleanTechnica reported.

“It’s no surprise that the U.S. solar pipeline is surging as costs continue to fall and solar becomes the lowest cost option for utilities, corporations and families,” Abigail Ross Hopper, president and CEO of SEIA, told CleanTechnica. “However, as we push for solar to represent 20% of U.S. electricity generation by 2030, smart policies like an extension of the solar Investment Tax Credit will be critical to reach this goal.”