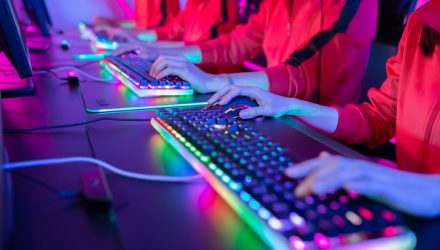 The  VanEck Vectors Video Gaming and eSports ETF (NASDAQ: ESPO) is already up 5.60% to start 2020, confirming that many investors are banking on growth for the burgeoning esports industry. Some recent data points indicate those wagers could prove accurate.

“According to the Consumer Technology Association, the esports industry, centered on competitive organized video gaming, crossed the $1 billion mark in 2019. The association’s research also found that more than 70% of Americans ages 13 to 64 play video games,” reports S&P Global Market Intelligence.

Data confirm the esports market is booming and will continue to do so over the next several years.

“The eSports market is expected to grow rapidly in the following years. According to GoldenCasinoNews.com, from an estimated $865 million in 2018, eSports worldwide revenues are projected to increase to $1.79 billion in 2022, meaning it will double in the next three years,” reports Golden Casino News.

When it comes to TV viewership, which is expected to be a major source of esports growth in the coming years, there’s a surprising fact: the competitions frequently draw more viewers than there are gamers.

“Ann Hand, founder and CEO of Super League Gaming, an esports platform aimed at amateur gamers, also noted that, like traditional sports, esports viewer numbers are exponentially larger than the number of people who actually play,” according to S&P Global Market Intelligence.

ESPO, one of the fastest-growing ETFs in its respective category, has $72.1 million in assets under management and holds 25 stocks.

Although it allocates 36.22% of its weight to domestic equities, ESPO is highly levered to the growth of e-sports in Asia as Japan, China and South Korea combine for over 48% of the fund’s weight.