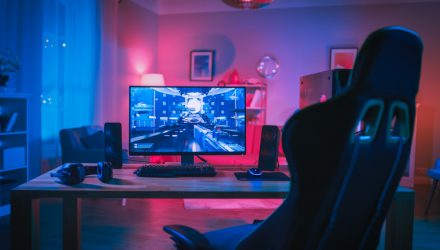 A new supercycle is revving up. And if history repeats, this supercycle will hand out profits of 8X to 18X, starting now.

If you’ve studied investing, you’ve likely come across the idea of “cyclical” assets. Cyclical assets go through boom and bust cycles. One year they surge in price, the next year they plummet.

Housing stocks are cyclical (read our recent guide on how to profit from the biggest housing boom in history), airline stocks are cyclical, gold is famously cyclical. Most commodities like oil, wheat, and steel are cyclical. Let me tell you about a new supercycle that was just born in a quiet corner of the markets.

Like other cyclical assets, the “video game supercycle” has everything to do with supply and demand. You see, a new generation of video game consoles comes out every five to eight years.

This isn’t just a big deal for “gamers.” It’s a mammoth opportunity for investors. During the last video game boom, you could have pocketed returns of 8X, 14X, and 18X in just six years!

It said it will release its highly anticipated PlayStation 5 video game console next year. Microsoft (MSFT) will also introduce its “next-gen” console—code named “Project Scarlett”—just in time for the 2020 holidays. The video game industry has been waiting years for this news.

Sony last made an announcement like this in February 2013 when it unveiled the PlayStation 4. Eight months later, PlayStation 4 hit the shelves. Microsoft rolled out its own system, Xbox One, a week later. Since then, Sony has sold more than 90 million PS4s! Microsoft has sold 44 million Xbox Ones. 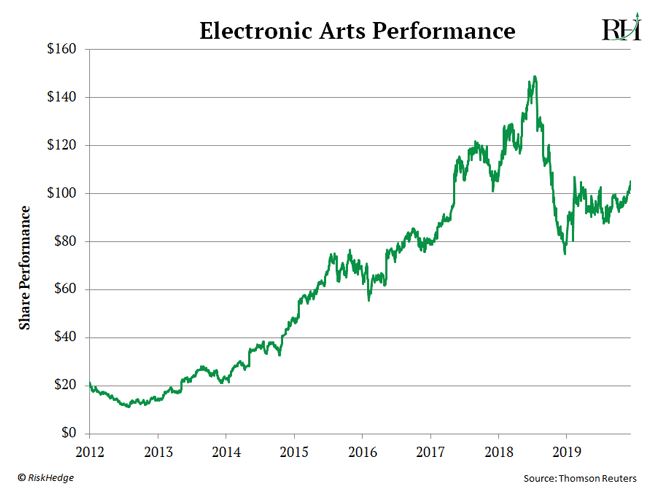 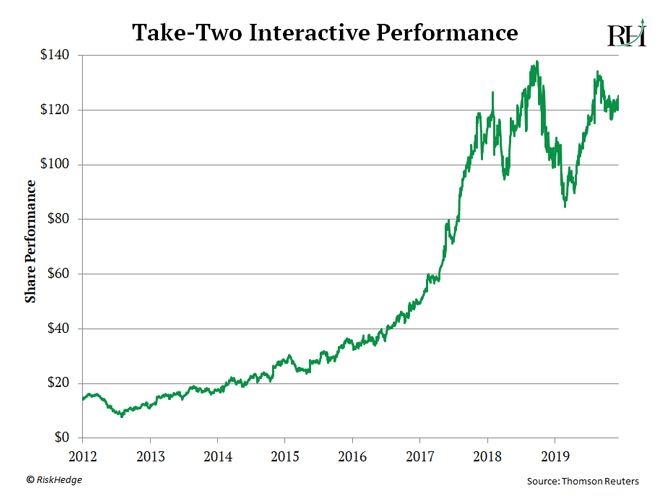 Activision Blizzard (ATVI), best known for its insanely popular Call of Duty series, posted the smallest gains of these three. It surged “just” 690% from 2012 to 2018. 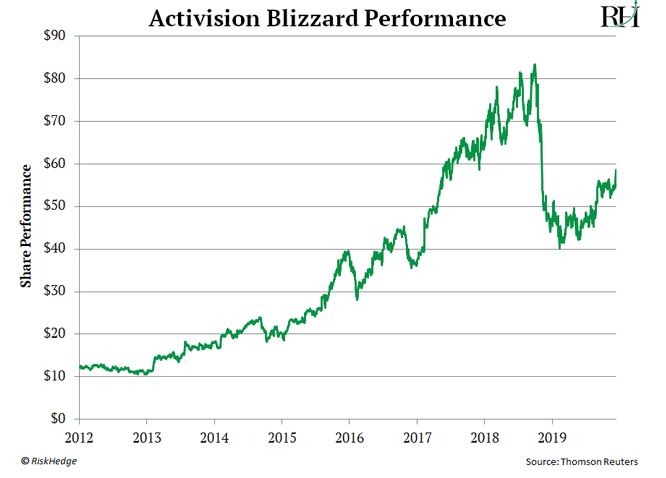 These companies don’t sell consoles like Microsoft and Sony. They sell video game titles. These are the video game stocks you want to focus on.

When someone drops $500 on a new video game system, they want to get their money’s worth. So, gamers typically buy a few video games right away. Avid gamers don’t stop there. They’ll buy dozens of new games to keep themselves entertained for years.

That’s why sellers of video games don’t just enjoy an initial boost in sales when a new console comes out. As long as they produce games people want to play, they keep collecting revenue for years and years as gamers keep buying new games.

EA hasn’t approached its previous high since July 2018. Take-Two has gone nearly 15 months without setting a new high, while Activision peaked in October 2018. Keep in mind, the S&P 500 has set more than 20 all-time highs this year!

Why have video game stocks been “dogs” lately? It’s not because they’re bad companies, or because video games are no longer popular. More than 2.5 billion people play video games worldwide!

As I showed you, these stocks went ballistic for six straight years from 2012–2018. Then they ran out of steam. No major new consoles have been released since 2013, which made it hard to sell new games.

Now these stocks have “digested” their gains from the last supercycle, and they’re preparing to enter a new one. According to GlobalData, the video games market was worth $131 billion last year. By 2025, it’s projected to be a $300 billion industry. In other words, it’s set to nearly triple over the next few years!

But here’s thing. You should not wait until the new consoles hit the shelves to buy video game stocks. Now is the ideal time to buy in. According to the investment bank Cowen, Activision, Take-Two, and Electronic Arts beat the stock market by an average of 26% in the year leading up to the last three major console launches, which occurred in 2000, 2005, and 2013.

EA has surged 31% since February—double the S&P 500’s return over the same period. 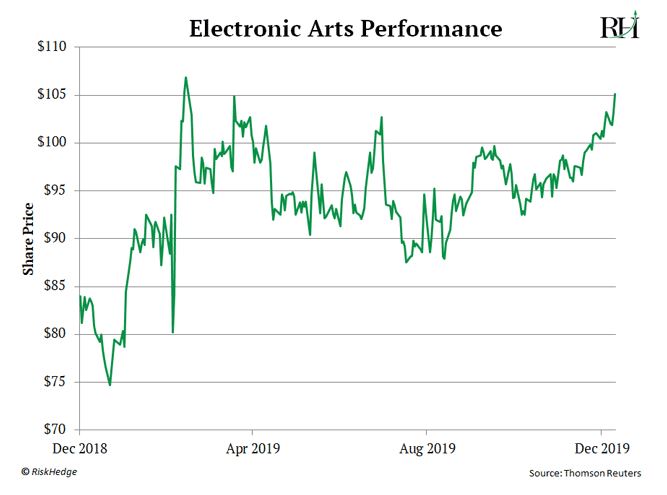 Take-Two has jumped 48% since February—beating the market by more than 3 to 1. 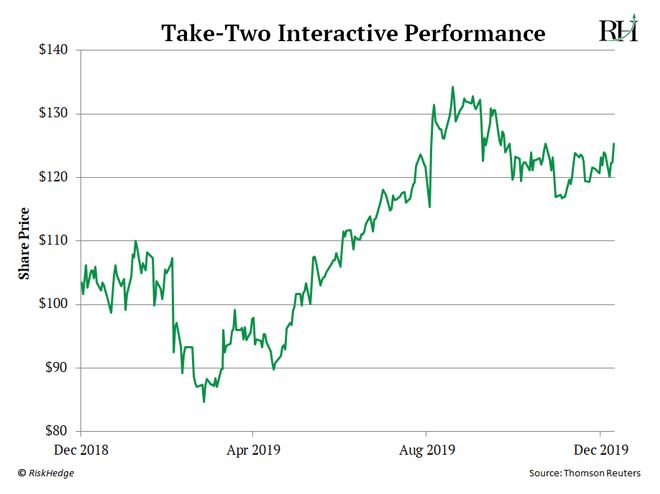 Activision is waking up, too. It’s climbed 46% since February—nearly triple the S&P 500’s return over the same period. 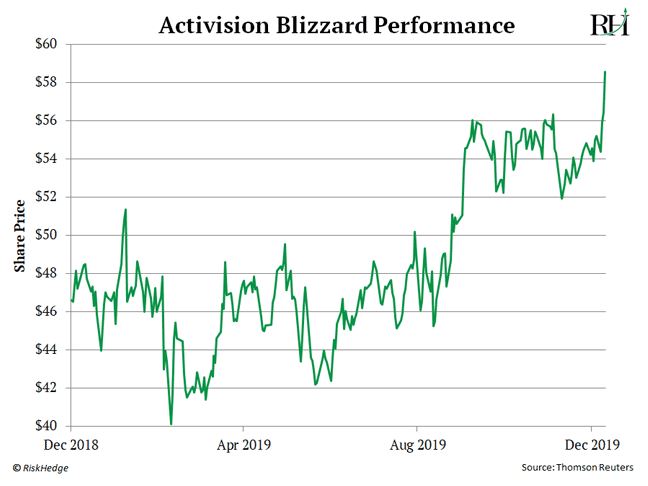 These are strong gains for such short periods. But these stocks are just getting started. All three are still trading well below their highs:

More important, video game super cycles don’t play out over a few months, or even a couple of years. They can last five years or longer!