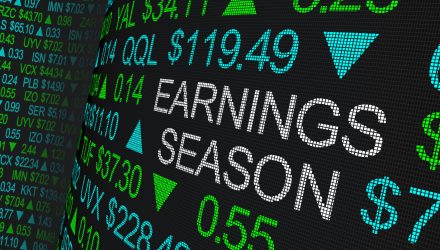 Stocks and index ETFs climbed on Friday to notch fresh highs yet again, fueled by strong earnings from major companies as well as robust economic data indicating a bounce in the economy.

The Dow Jones Industrial Average rallied over 0.3%, passing the 34,000 level to mark a historic intraday high. The S&P 500 scrambled another 0.3% as well, to charter a fresh high, while the Nasdaq Composite floated near breakeven.

In what has been a strong earnings week, Morgan Stanley reported better-than-expected earnings, aided by substantial trading and investment banking results. The news boosted the bank’s stock 0.3%. Meanwhile, PNC Financial advanced over 2% after the bank beat estimates on the top and bottom lines for its first-quarter report.

The news was bullish for banking ETFs like the Vanguard Financials ETF (VFH), which climbed 0.25%. Bank shares have done well so far in 2021, with the KBW Bank Index beating the S&P 500.

“The first wave of Q1 big bank results look pretty much as strong as most analysts had expected – even stronger actually,” said JJ Kinahan, chief market strategist at TD Ameritrade. “It’s possible that we’re in a powerful market that’s in a forgiving mood when it comes to bad news. The path of least resistance for stocks continues to seem to be to go higher, with the market climbing a wall of worries that just doesn’t go away.”

The stock market is headed for yet another winning week. The S&P 500 has rallied 1.3% this week, targeting a month straight of gains. Meanwhile, the Dow has advanced 1%, while the Nasdaq added 0.9%.

“The Dow’s push through 34,000 is a signal that investor appetite for future growth prospects is spilling over into more value-oriented names,” said Peter Essele, head of portfolio management at Commonwealth Financial Network. “The demand for industrials and more cyclically-oriented areas should continue as the vaccines take hold and earnings potentially come in higher than originally expected.”

“We are expecting this economic recovery. It’s only just starting to unfold,” Seema Shah, Global Investors chief strategist, Principal, told Yahoo Finance. “We think that as our earnings numbers go through, showing that really positive picture, confirming that positive picture, then that’s going to give the market an additional ‘oomph.’ But certainly, the rotation that we’ve already seen over the last couple of weeks, couple of months, has still got further to go. And really equity markets are in a very good position given this very strong economic backdrop.”

Economic data also helped to bolster investor appetite. The University of Michigan said Friday that its preliminary consumer sentiment index advanced to a one-year high of 86.5 in the first half of April, from 84.9 last month.

While investors have been concerned that the Fed may raise rates if the economy improves, Federal Reserve Governor Christopher Waller said Friday that there is still no reason to begin tightening monetary policy.

“I think the economy is ready to rip,” Waller told CNBC’s Steve Liesman during a “Squawk on the Street” interview. “There’s still more to do on that, but I think everyone’s getting a lot more comfortable with having the virus under control and we’re starting to see it in the form of economic activity.”

On Thursday, data revealed an 8.9% pop in March retail sales numbers, thanks to additional stimulus that boosted consumer spending. The metric beat the Dow Jones estimate of a 6.1% gain. The Labor Department also reported 576,000 first-time filings for unemployment insurance for the week ended April 10, hitting the lowest level since March 2020.