You are at:Home»Featured»Stocks Soured in September, While Inverse And VIX ETFs Scored 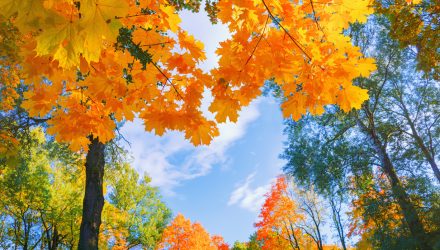 Stocks Soured in September, While Inverse And VIX ETFs Scored

With the last day of September more than halfway over, stock indexes and ETFs have continued to fall as investors prepare to finish a challenging but predictable month.

The Dow Jones Industrial Average shed another 370 points, or over 1%, after climbing at the open. Meanwhile, the S&P 500 fell 0.5%, while the tech-heavy Nasdaq Composite improved almost 0.5%.

September has been a historically rough month for stock buyers, and 2021 was no exception. Collectively, the Dow is off by over 3% for September, while the S&P 500 lost about 4% and the Nasdaq fell by more than 4%.

“September lived up to its reputation and dented stock portfolio returns, but not too badly,” wrote Ed Yardeni of Yardeni Research. “There has been a lot of concern that higher wages, higher energy prices, and higher transportation costs will weigh on earnings for the remainder of this year and into 2022. It’s certainly something we’ll be tracking. But so far, analysts remain relatively sanguine.”

A number of factors have plagued markets, including concerns about inflation and supply chain issues, worries about the tapering of the Federal Reserve’s bond buying program, increased scrutiny of the Fed’s investment practices, and the ongoing spread of the various coronavirus variants and their effect on the economic recovery.

Major stock ETFs were mixed to lower as well on Thursday. The SPDR Dow Jones Industrial Average ETF (DIA) and SPDR S&P 500 ETF Trust (SPY) both showed losses, while the Invesco QQQ Trust (QQQ) was green as of just before 3:00 PM EST.

The moves have resulted in more volatility of markets as well, with the VIX or CBOE Volatility Index falling over 3.5% just Thursday and making a number of 10-20% spikes throughout September.

This wasn’t all bad news for VIX investors who chose to use ETFs, as the ProShares Short VIX ETF (SVXY) climbs as the VIX falls, while other ETFs like the iPath Series B S&P 500 VIX Short Term Futures ETN (NYSEArca: VXX) and the ProShares VIX Short-Term Futures ETF (NYSEArca: VIXY) are helpful to trade falling markets, as the VIX typically runs inversely with stocks.

There have been other bright spots for investors as well. Energy and financial stocks, which have been some of the best performers in recent weeks, are one example, although they dipped on Thursday.

This has been positive for ETFs like the Invesco DWA Energy Momentum ETF (PXI), which feeds off momentum in the energy sector. PXI seeks to track the investment results of the Dorsey Wright® Energy Technical Leaders Index, which is composed of at least 30 securities of companies in the energy sector that have powerful relative strength or “momentum” characteristics.

Meanwhile, the Invesco KBW Regional Bank Portfolio (NYSEArca: KBWR) and other banking ETFs benefitted periodically from moves in financials throughout the month.

On Thursday, however, tech stocks climbed as the Nasdaq tried to break a four-day losing streak. Tech stocks have been hurt by the recent climb in the 10-year Treasury yield, which crested 1.567% earlier in the week.

Climbing yields are usually viewed as a negative for tech stocks because they make distant future profits less attractive to investors.

Finally, the downdraft has been fortuitous for inverse stock ETF investors, who have seen massive gains in funds like the ProShares Short S&P 500 (SH) and another highly leveraged ETF, the Direxion Daily S&P 500 Bear 3X Shares (SPXS) throughout September.

SH offers inverse exposure to an index comprised of large-cap U.S. equities, making it a potentially attractive option for investors looking to bet against this sector of the U.S. economy. It’s important to note that SH is designed to deliver inverse results over a single trading session, with exposure resetting on a monthly basis. Investors considering this ETF should understand how that nuance impacts the risk/return profile, and realize the potential for “return erosion” in volatile markets. The fund is not recommended for long-term buy and hold strategies, as sudden market shifts can cause significant damage.

Overall, analysts saw a pullback coming this month, but are still hopeful that the move will be short-lived.

“We’ve been talking about spooky season — September and October — and the expectation of about a 5% dip from the high, which we’ve had on an intraday basis. But we’ve said we don’t expect a correction,” said David Bianco, chief investment officer at DWS Group.

“We wouldn’t get caught up in any end-of-quarter machinations today and continue to advise fading rallies (especially in tech) as the coming weeks will stay rocky,” wrote Adam Crisafulli of Vital Knowledge.

September’s losses have resulted in a mediocre third quarter for the market. As of Friday, the Dow was slightly in the red for the last quarter period, while the Nasdaq Composite nearly broke even. The S&P 500 was up 1.4% and was still roughly 16% higher on the year.

October has also been notorious for some tumultuous sell-offs, but it can also herald better seasonal performance for stocks. The S&P 500 averages a 0.8% gain for the month, according to the Stock Trader’s Almanac.

“We haven’t had even a 5% pullback since October of last year. It’s going to be a year. This feels a lot worse than it actually is because we haven’t had much volatility since last October, last September,” Paul Schatz, president of Heritage Capital, told Yahoo Finance Live on Wednesday.

“But remember, all the reasons why we’re going down — nothing is new,” Schatz added. “You’ve got the debt ceiling and the government shutdown and Evergrande and inflation. All known things. None of these are going to befall the bull market or cause a recession. There’s always some kind of short-term thing the market focuses on to get a pullback going. We’ve got it. I think it’s one you buy with both hands in the next week or so, and I think we’re going strongly to new highs in Q4.”