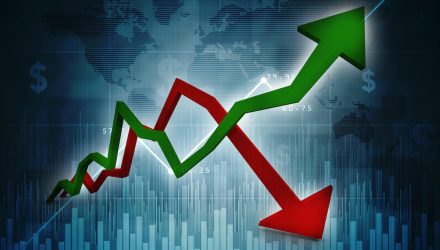 After a tumultuous day of trading on Thursday, stocks and index ETFs retraced gains on Friday as investors digested a mixture of earnings results that included a considerable win for Amazon.

The major stock averages are trading red on the last day of the month, with S&P 500 down 0.58%, the Dow Jones Industrial Average off by about 0.64%, and Nasdaq Composite about 0.41% lower.

Amazon reported a record first-quarter profit, announcing that profits more than tripled to $8.1 billion and January-to-March sales surged 44% to $108 billion. The results smashed analysts’ expectations, with Amazon earning $15.79 per share vs. the consensus estimate of $9.54.

Amazon’s results showed demand remained strong for its massive online retail business, even as the economy started to open up some. Shares rose 1.5%, but that was not enough to lift sentiment for the whole market.

Friday’s weakness in stocks and ETFs means at least some of the major averages could have a losing week. The Dow has remained down on the week since Monday. The S&P 500 and Nasdaq are still attempting to hold onto gains, however.

Meanwhile, inflationary data wasn’t as ominous as as feared, as the 10-year yield remained flat.

While some investors worried about increasing inflation and possible eventual tax hikes, analysts are still optimistic about the stock market’s prospects.

“I think what we’re going to see, as we’ve seen throughout the course of this year, is a continued story of winners versus losers,” he added. “So we still have to be careful about security selection, about sector selection, moving forward. And to me, I think a lot of that has to do with this continued rotation into some of the more cyclical parts of the market.”

“This positive backdrop does not mean that the current period of low volatility will persist. We expect bouts of market turbulence, as investors fret over rising inflation and the uneven global progress in combating the pandemic,” Mark Haefele, chief investment officer of global wealth management at UBS, wrote in a note Thursday. “With global stocks close to record highs, the market is also likely to be vulnerable to disappointing news on the economy or COVID-19.”