You are at:Home»Featured»Stocks And Index ETFs Roar Higher Amid Coronavirus Vaccine Hopes 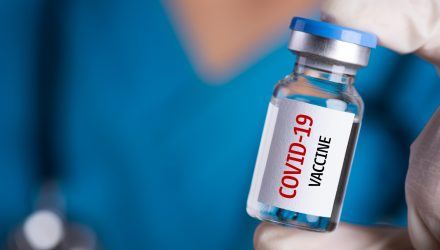 U.S. stocks rocketed on Monday, moving into positive territory for May, following news that drugmaker Moderna released positive, preliminary results from its first human trial of its experimental Covid-19 vaccine, generating optimism that the medical community was taking steps to beat the coronavirus.

Stocks surged higher in the extended session trade on Sunday, to gap open higher in the regular session and boost all three of the major stock indexes. The Dow Jones Industrial Average rallied 845 points or 3.45%, while S&P 500 and Nasdaq Composite also made significant gains since Friday, climbing 3.12% and  2.4%, respectively.

Stock Index ETFs are green today as well, tracking moves in the benchmark stock indexes. The SPDR S&P 500 ETF Trust (SPY), is off by 2.93%, the SPDR Dow Jones Industrial Average ETF (DIA) is 3.41% higher, while the Invesco QQQ Trust (QQQ), is the laggard today, climbing 1.81%

Stocks and other risk assets also received an injection of positive sentiment after Federal Reserve Chairman Jerome Powell on Sunday night adopted a more sanguine outlook on the U.S.’s growth prospects while underscoring the fact that the central bank still retained tools required to stem the economic downturn.

Powell, whose more bleak comments last week precipitated a drop in stocks, noted that the recovery could take some time, but that the U.S. economy was robust.
“But I would just say this. In the long run, and even in the medium run, you wouldn’t want to bet against the American economy,” Powell said in a prime-time interview Sunday.
“The Fed confirmed they would aim a liquidity hose at markets, and that’s all investors care about right now,” said Joe Saluzzi, co-head of equity trading at Themis trading.
Markets are also rallying on news that Moderna Inc. announced positive results from a phase-one clinical trial for its experimental coronavirus vaccine, boosting investor hopes for a rapid treatment or vaccine for the nefarious pandemic that has infected more than 4.7 million worldwide thus far, according to data compiled by Johns Hopkins University.
The next move is a phase-two trial, which has already been approved to begin by the Food and Drug Administration. The phase-one trial was done in conjunction with the National Institute of Allergy and Infectious Diseases.

“What the market does is it tries to discount ahead. People are now going to anticipate the treatment, and the bets are coming in that we saw an end coming in sooner rather than later,” said Saluzzi, in an interview.