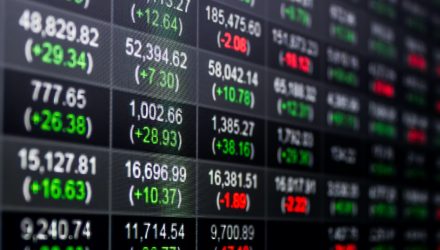 Stocks are struggling on Wednesday after a strong start to the short holiday week, as tech companies are dragging down markets overcoming financial sector gains.

Overnight the S&P 500 continued its rally to break to new local highs but gave back all of those gains and more in the regular trading session before bouncing some into the lunch hour.

Earlier in the day, the benchmark index exceeded its 200-day moving average, a positive indicator for technical analysts and a key level watched by traders, as the index traded over 3,000, a level not closed above 3,000 since March.

While the Dow Jones Industrial Average has been trending up on Wednesday, adding just over 1% as of noon EST, the Nasdaq Composite has been stifling gains, with the index dropping 1.3% as tech giants Facebook, Amazon, Apple, Netflix, and Google-parent Alphabet all relinquished roughly 1% or more. The Dow Jones Industrial Average has struggled to remain positive but is well off its session high.

As investor optimism over reopening the economy broadens, stocks that Zoom Video and Netflix, which have been a source of entertainment and need for people sheltering-in-place lost ground on Wednesday as investors rotated out of those names. Zoom and Netflix sunk 8.1% and 3.3%, respectively, and e-commerce names Shopify, Amazon dropped 9.6%, 3.2%, and 8.9%, respectively as well.

On Tuesday, the Financial Select Sector SPDR Fund (XLF) rocketed 5.79% amid moves in the financials, as the Vanguard Financials ETF (VFH) rallied 5.75%, and the Fidelity MSCI Financials Index ETF (FNCL) climbed a similar 5.8%, driven by bank and credit stocks.

JPMorgan Chase was up another 3.6% Wednesday while Citigroup advanced 4.9%. The SPDR S&P Bank ETF (KBE) gained 3% along with the SPDR S&P Regional Banking ETF (KRE). Both ETFs were headed for their best weekly performances since April.

“This is a rotation that we should get used to,” said Art Hogan, chief market strategist at National Securities. He noted the broader indexes could be under pressure at the start of it since some of the stay-at-home names make up a big chunk of the S&P 500′s market cap.

“It’s not necessarily index positive when that mean reversion happens, but it’s certainly much better to have this rally broaden out,” Hogan said.