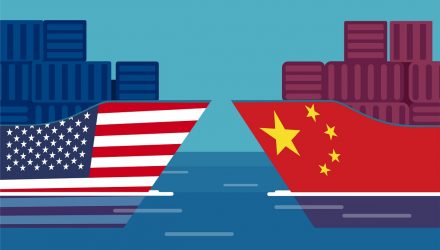 The Dow Jones Industrial Average dropped nearly 260 points so far, down over 1%, while the S&P 500 slid 1%. The Nasdaq Composite declined by 1%. All indices continue their decline.

Notably, the S&P 500 also handily broke below 2,800, and continues to trade below that price, a key technical level watched by traders, according to many analysts.

Just recently, China postured that it could use its dominance over the rare earth metals market, a market crucial to the U.S. technology and defense industries, to gain leverage in the trade war.

“We advise the U.S. side not to underestimate the Chinese side’s ability to safeguard its development rights and interests. Don’t say we didn’t warn you!” the People’s Daily said in a commentary titled “United States, don’t underestimate China’s ability to strike back.” The paper is the official newspaper of the Communist Party of China.

Only twice in history has China used the phrase, “Don’t say we didn’t warn you!” Once the phrase was used in 1963 ahead of China’s border war with India and the other instance was in 1987 right before China went to war with Vietnam.

The Opportunistic Trader’s Benedict notes that the market’s decline has been steady and without many large moves, making it much more sinister.

“This move is worse because everybody is waiting for a bounce and it hasn’t come,” he said. “If we went down 3% and then bounced up 1%, that’s a better scenario than drifting lower … It’s like a slow death.”