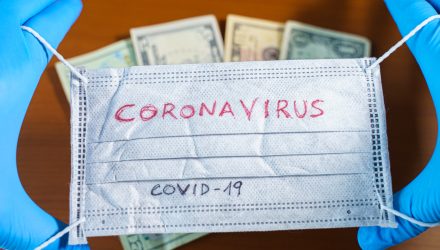 Stock Indexes ETFs Give Back Gains After Inspector General Removal

While equities had made a run higher early in the session on Tuesday, building on the robust momentum breakout from the recent range in the previous session, as investors were becoming more sanguine about a decline in fresh coronavirus cases, they were unable to maintain the momentum and close positive.

The Dow Jones Industrial Average had climbed over 800 points early in the session, while the S&P 500 rallied 2.6% while the Nasdaq Composite added 2.1%, but the benchmark indexes relinquished all of their gains to close near the prior day close, amid news that President Trump removed the Glenn Fine, the head watchdog who was overseeing the $2 trillion coronavirus package, just days after he was given that title.

“Mr. Fine is no longer on the Pandemic Response Accountability Committee,” Allen said, and he now “reverts to his position as the Principal Deputy Inspector General.”

Fine had been selected to lead the Pandemic Response Accountability Committee by his fellow inspectors general on March 30. The men were chosen by the new law to find a chairman for their committee.

A week before Fine was eliminated from the accountability committee on Monday by the President, Trump also made moves to overpower the inspector general for the corporate bailout fund.

Fine’s position of Special Inspector General for Pandemic Relief, or SIGPR, was designated due to transparency concerns that transparency with the dissemination of funds to corporations. The SIGPR is therefore required to deliver independent reports to Congress on how the money is being spent, and alert Congress if the White House ever tries to block their requests for information about the usage and whereabouts of the funds.

When Trump signed the $2 trillion package on March 27, he wrote that his administration would not be “permitting the [the Inspector General]to issue reports to the Congress without the presidential supervision.” This obviously calls into question how effectively Congress can do their job, given that they cannot oversee how the White House is using the $500 billion in funds.

While Republicans were largely unfazed by the move, Democrats were outraged.

“The sudden removal and replacement of Acting Inspector General Fine is part of a disturbing pattern of retaliation by the president against independent overseers fulfilling their statutory and patriotic duties to conduct oversight on behalf of the American people,” said Speaker Nancy Pelosi in a statement.

Markets were disrupted as well, as stocks plummeted into the close, with the S&P 500 losing more than 100 points in a matter of hours, and 60 points in just minutes.

Stock index ETFs were also crushed by the news and after moving 3% higher in sync with stock indices Tuesday, the SPDR S&P 500 ETF Trust (SPY) closed barely positive, while the SPDR Dow Jones Industrial Average ETF (DIA)  and the Invesco QQQ Trust (QQQ) closed essentially flat to negative on the day and all are losing in after-hours trading.