You are at:Home»Featured»Stock Index ETFs Steady Amid Declining Claims Data 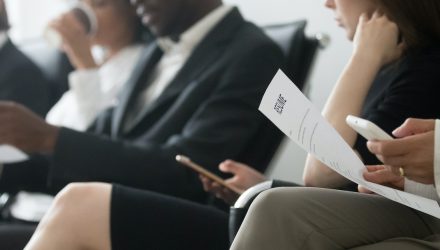 Stocks and index ETFs are trading mixed to higher on Thursday, at the top of Wednesday’s range, amid a decline in jobless claims.

The Dow Jones Industrial Average declined 0.13% in Thursday trading, while the S&P 500 added 0.13%, and the Nasdaq Composite is leading the charge toward recent highs, up nearly 1%.

Data released Thursday showed that first-time claims for unemployment insurance last week dropped below 1 million for the first time since March 21 indicating that the job market may be improving.

The total claims of 963,000 for the week ended Aug. 8 were significantly under the projected 1.1 million from economists surveyed by Dow Jones, and marked a drop of 228,000 from the previous week’s sum.

“The labor market continues to improve, but unemployment remains a huge problem for the U.S. economy,” wrote Gus Faucher, chief economist at PNC Financial Services. “The number of people filing for unemployment insurance, both regular and PUA benefits, continues to steadily decline as layoffs abate. But job losses remain extremely elevated, far above their pre-pandemic level.”
There is some speculation and debate however, as to whether the decline suggests that benefits are no longer necessary, and may in fact be impeding workers’ efforts to return to work, in effect providing an incentive to stay at home.
The decline in unemployment claims “provides some fuel for the argument that the enhanced benefits were providing an incentive for people to stay away from returning to work if they had the option,” Jefferies said in a note. “The data of the past two weeks will not help the arguments of lawmakers fighting to extend the expired benefits.”
Stocks have been rotating over the last month, with a shift from technology to industrials, as the S&P 500 has surged toward February’s highs.
According to Michael Bapis, managing director of Vios Advisors at Rockefeller Capital Management, a quest for safer stocks and a concentration on infrastructure could continue to catalyze the transition and move higher.

“You’re going to start to see a rotation from the growth names, the high-flying growth names, into some more value, safe haven names and I think that’s the first reason. The second reason, even though we don’t have an infrastructure bill, you do have an administration focused on infrastructure. Everybody I think agrees that we are due for an infrastructure upgrade in America,” Bapis told CNBC’s “Trading Nation” on Wednesday.