You are at:Home»Featured»Stock Index ETFs Rally Again Amid Vaccine Optimism 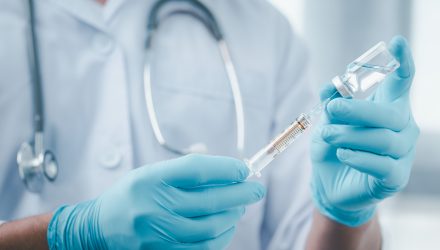 Stock indexes and index ETFs continued to rally Wednesday, with the Nasdaq reaching fresh highs, as investors are encouraged by a possible coronavirus vaccine and healthy earnings from Disney. However, lawmakers are still at odds over negotiations on a fresh round of Covid-19 stimulus.

The Dow Jones Industrial Average gained over 300 points, or more than 1.13%, while the S&P 500 rallied 0.63% and the Nasdaq Composite advanced 0.49% to reach a fresh high after struggling last week. Both the Dow and S&P 500 were headed to notch their fourth consecutive daily gains. The Nasdaq was headed for a six-day winning streak.

Disney helped buoy markets by earning 8 cents per share, in contrast to the loss analysts projected of 64 cents per share. Disney claimed it now has 100 million paid subscribers across its streaming services, which include Disney+, Hulu, and ESPN+. The entertainment company jumped 10.7% Wednesday.

Investors are also motivated by coronavirus vaccine possibilities. Johnson & Johnson announcing that it reached a $1 billion deal with the U.S. government to produce 100 million doses of its coronavirus vaccine candidate, given that the panacea works. J&J shares added 0.9% amid the news. Meanwhile, Novavax shares surged14.3% after the company reported phase one vaccine trial results that showed a positive immune response among patients. The ALPS Medical Breakthroughs ETF (SBIO) rallied along with the Vanguard Healthcare ETF (VHT) which contains JNJ.

Ari Wald, head of technical analysis at Oppenheimer, notes that the rally from the March low has been “concentrated” in a small group of stocks, (mainly tech), it’s only a matter of time until the rest of the market jumps on the bandwagon. At that point, investors can be more confident in a sustained bull market move, and not just a retest of highs.

“We haven’t gotten the all-clear,” said Wald. But “One by one, you’re going to see these areas that haven’t participated start to break out to the upside … You want to see more stocks trading above their 200-day moving average on the NYSE. That usually marks the start of a steadier bull market.”

It is still possible that if there is no vaccine on the other hand, that a swift a painful market correction could follow.

“The bottom line is that if we do see the real disappointment in the stimulus or the vaccine, then a 10% correction is the likely best-case scenario, and it’ll come quickly,” said Tom Essaye of The Sevens Report, in a note. “We cannot be complacent.”