You are at:Home»Featured»Stock Index ETFs Gain For Third Day As Political Tensions Abate 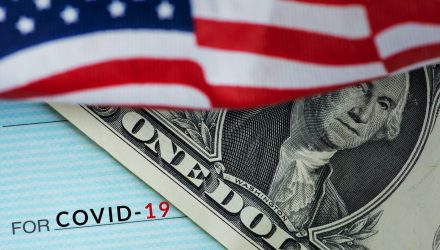 Following what is sure to be a historic day, where pro-Trump protesters overran the Capitol building, and Congress confirmed the election of Joe Biden as president, stocks and index ETFs hit fresh all-time highs on Thursday, as political tensions eased.

As investors pushed aside drama from the prior day, the Institute for Supply Management helped the sentiment, noting that its index for non-manufacturing activity in the U.S. climbed to 57.2 in December from 55.9 in November. Economists polled by Dow Jones had predicted the index to be at 54.5.

The tech and consumer discretionary sectors gained 2.3% and 2%, respectively, to buoy the S&P 500 and boost ETFs like the Amplify Online Retail ETF (IBUY).

Following a Trump rally on Wednesday, pro-Trump rioters assailed the U.S. Capitol just as lawmakers commenced the procedural process of counting the Electoral College votes to officially declare Joe Biden the winner of the election.

Unfazed By The Storming

Stocks and index ETFs seemed ultimately unfazed by the historic storming of the Capitol, as the benchmark indices finished higher on Wednesday, amid increasing prospects for more fiscal stimulus.

“There should be no mystery as to why the markets didn’t care about what happened in the Capital yesterday, however disturbing, disgraceful, and embarrassing it was,” said Peter Boockvar, chief investment officer at Bleakley Advisory Group. “It’s because it has no bearing on the direction of the economy, earnings, and interest rates. It’s that simple.”

Despite the uprising, analysts suggest that markets are confident that politics will move forward as expected.

“I think the reason the markets aren’t too flummoxed is it’s not going to change the transition of power,” Tom Lee, Fundstrat Global Advisors co-founder, said.

The Georgia runoff race also resulted in a 50-50 Senate that Democrats will control, due to the deciding vote from Vice President-elect Kamala Harris, which gave investors and financial pundits hope that more fiscal stimulus will be passed shortly, and in turn, lifted markets.

“With the political tensions easing, more stimulus expected to help boost the economy, and coronavirus vaccines helping bring a measure of calm to investors and traders, it seems that the market can now focus on earnings season,” he said.