You are at:Home»Featured»Stock Index ETFs Accelerate Gains to Close Out Volatile Week 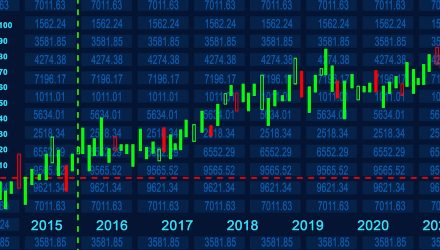 After a rough start to the week, stocks and index ETFs continued to drive higher on Friday, building on gains in the prior session, thanks to moves in technology shares and stocks benefitting from an economic recovery.

The Dow Jones Industrial Average advanced 0.77% after a rough start to the week. The S&P 500 added 1.22% to trade in the green for a second day as well. Meanwhile, the Nasdaq Composite jumped 1.9%, making moves after prior underperformance.

After a sharp decline earlier in the week, stocks and index ETFs have ignored slowing consumer purchase data from last month and pushed higher. Advance retail sales were unchanged for April, the Commerce Department said Friday. Meanwhile, the Dow Jones had estimated an 0.8% gain.

Despite the gains over the last couple of days, index ETFs and key benchmarks are still headed for losses for the week, after inflation fears damaged investor sentiment. The Dow and the S&P 500 are down more than 1% each for the week, while tech stocks have been hit especially hard, pulling the Nasdaq down over 3% for the week.

But some analysts see the recent decline as an opportunity to relieve pressure in an overbought market.

“This week’s decline was a good thing,” said Tony Dwyer, chief market strategist at Canaccord Genuity. “There needs to be a correction into the summer that is meaningful enough to eliminate the extreme intermediate-term overbought condition and excess optimism.”

Tech stocks charged higher on Friday, with Facebook gaining almost 2.5%, while Apple, Amazon, Netflix, and Alphabet were all trading up at least 1%. The moves helped drive the iShares U.S. Technology ETF (IYW) up over 2.1%, and the VanEck Vectors Semiconductor ETF (SMH) over 2.5% higher.

Amid a sea of green sectors, Disney shares were the exception, falling 4.5% after the entertainment giant reported weaker-than-expected revenue and streaming subscribers. However, the move had little effect on the Vanguard Communication Services ETF (VOX), a key holder of Disney, which still managed to gain over 1.2% Friday.

Stocks set to benefit from an ongoing economic resurgence popped again Friday after the Centers for Disease Control and Prevention announced that, in most settings, fully vaccinated people don’t have to wear masks indoors or outdoors, paving the way for more consumption.

Stocks and index ETFs encountered volatility this week as investors fretted over spiking inflation. The Consumer Price Index surged 4.2% from a year earlier in April, which was the fastest rate since 2008, ushering in fears that the Federal Reserve might need to reign in its accommodative monetary policy.

“Higher inflation is likely to remain in the spotlight as the post-pandemic recovery accelerates,” Mark Haefele, chief investment officer at UBS Global Wealth Management, said in a note. “But while we expect inflation fears to generate bouts of volatility, and we continue to position for reflation, we also see such market swings as an opportunity to build exposure to structural winners.”

“I think the big problem for investors right now is the Fed isn’t going to change its course any time soon. But a lot of people who do have inflation fears longer-term are going to look for a shift in monetary policy that won’t take place,” George Ball, Sanders Morris Harris CEO, told Yahoo! Finance on Thursday. “And so while people wait and wait and wait, those fears will become greater. And I think ultimately they tug prices down, although not yet. We of the investing class like to see prices going higher, and there is momentum still in the market that is still on the bull side, at least temporarily, than on the downside.”

“The big beats in US CPI today do tell us a few things about the current economic environment, but one of those things isn’t that there is a change in the secular inflation regime. The magnitude of the beat appears shocking, but needs to be seen in the context of the historic base effects and the unique impact of lock downs and reopening on the data at the moment,” said Andrew Mulliner, Global Bonds Portfolio Manager at Janus Henderson Investors.

With a robust earnings season, some analysts still predict more upside for stocks and index ETFs, and are encouraging investors to buy on dips.

“The corporate turnaround is strong enough to keep markets rising, even as bond yields increase in anticipation of central bank tightening,” Robert Buckland, equity strategist at Citi, said in a note. “So buy any short term dips, as we may be seeing now. There is a time to turn more cautious but that may be next year, not this.”