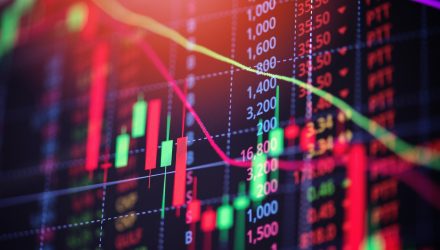 Stocks and index ETFs traded in the red on Tuesday, after a healthy beginning to the new month on Monday, with technology stocks leading the way lower.

The Dow Jones Industrial Average held up the best of the major benchmarks, falling 250 points. The S&P 500 shed about 1.2%, and the tech-dominated Nasdaq Composite was the hardest hit tumbled over 2.5%.

The moves came amid comments from Treasury Secretary Yellen that interest rates may need to climb to keep the economy in check and avoid excess froth.

Big name tech stocks like Facebook, Amazon, Apple, Netflix, and Alphabet, have all lost major ground on Tuesday, with some of the FAANG members, such as Apple, down nearly 4%. Investors also put pressure on other stocks that were favorites on Monday, ditching reopening plays that included airlines, cruise lines, and retailers, and driving ETFs like First Trust Consumer Discretionary AlphaDEX Fund (FXD) and the U.S. Global Jets ETF (JETS) lower.

In addition, while Pfizer reported quarterly results that beat expectations and raised its 2021 guidance, the stock remained flat.

“Investors could be getting increasingly disappointed that stocks are not doing well in the face of fantastic earnings news,” Jim Paulsen, chief investment strategist at the Leuthold Group, told CNBC.

“The numbers were good but Wall Street response was neutral at best. When the best earnings growth since 2010 spawns a yawn it’s pretty clear that perfection is priced in,” Hilary Kramer, chief investment officer for Kramer Capital Research, wrote in an email Monday. “While there’s no seasonal sell signal flashing, there’s no immediate reason to buy either. This is a great opportunity to review your positions, make any adjustments and then retreat to the sidelines for the next few months.”

While tech has led the way off the pandemic lows, investors may be becoming more leery of such plays as stocks have continued to hit all-time highs.

“The whole thing to me is this amazing leadership problem,” Frank Gretz, a technical analyst at Wellington Shields, told CNBC. “There were 2,800 stocks up on the New York Stock Exchange yesterday, but it was hard to make money. That’s a very unusual pattern. It’s just the difference between these reopen stocks versus the tech stocks.”

The Dow and the S&P 500 just notched their third consecutive months of gains, bringing their 2021 totals to more than 11% each.

While analysts see more potential upside going forward, they recognize that a pull-back is possibly warranted, setting up for the old “sell in May and go away” adage.

“I think what we’re looking for is potentially something more like March where we chopped around a bit and digested February’s moves. We’re going to chop around a bit and digest April’s moves,” Bill Baruch, Blue Line Futures president, told Yahoo! Finance on Monday. “4,186 is a big level for me in the S&P 500, and it’s been rather sticky. Yes we’ve been above it, we’ve also been a little bit below it since achieving it, and I think it’s a very sticky level and we’re going to see it play back and forth.”