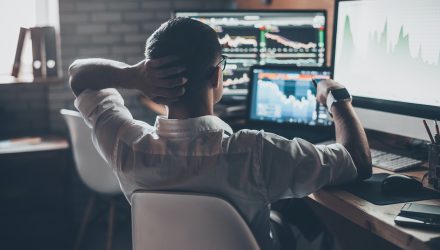 Stocks and index ETFs are mixed again on Friday, as there is increasing concern among investors and analysts that the S&P 500 continues to fail to beat its February record high.

The S&P 500 dropped 0.2%, the Nasdaq Composite was slid 0.5%, and the Dow Jones Industrial Average pulled back 42 points, or 0.28% amid ongoing concerns that a stimulus deal will not be reached.

The SPDR Dow Jones Industrial Average ETF (DIA) and SPDR S&P 500 ETF Trust (SPY) are attempting to remain positive on Friday, despite apparent exhaustion across the board in stocks.

Tech stocks like Facebook and Amazon, which fell 0.8% and 1.2%, respectively, continued to pull on the market, dragging down the Invesco QQQ Trust (QQQ) and the Technology Select Sector SPDR Fund (XLK). Google parent Alphabet also stumbled 0.9% while Apple declined 1.4%.
Meanwhile, leisure and travel stocks, which would benefit from the economy reopen rallied on Friday. United Airlines, Delta and American were all up more than 1%, helping to stabilize the U.S. Global Jets ETF (JETS). Carnival Corp and Norwegian Cruise Line also advanced 2.5% and 2.2%, respectively.

While it opened just 0.6% below its intraday record high, the S&P 500 has essentially reached a double top, and yet has struggled to hold above its record closing high several times this week, eventually slipping back down below the high, which is concerning investors.

“With the S&P 500 failing to puncture its February 2020 highs despite a few attempts this week, many observers believe it’s a clear sign of exhaustion,” Frank Cappelleri, executive director at Instinet, said in a note. Cappelleri noted that technical indicators called Demark indicators, which are used by technical analysts to assess market momentum, have flashed sell signals over the past 10 days.

“While these don’t always pinpoint a top and/or precede a huge drawdown, over the last three years, the S&P 500 eventually has pulled back to where these signals first hit every time,” Cappelleri said.

The lack of a definitive stimulus deal is also concerning for investors, as traders also scrutinized retail sales numbers Friday while awaiting clues as to further coronavirus stimulus.

“Given the current fiscal stalemate, it is extremely unlikely that consumers receive any additional fiscal support in August. Needless to say, the outlook for September is highly dependent on fiscal policy,” said Aneta Markowska, chief economist at Jefferies, in a note.