You are at:Home»Featured»Stock ETFs Trade Mixed Amid Spiking Covid-19 Cases 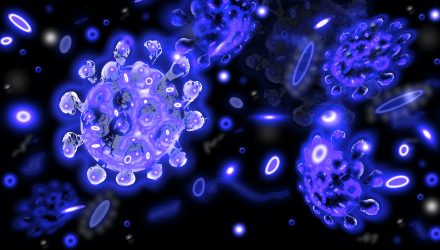 Stocks are mixed, driving index ETFs and benchmarks slightly higher on Friday, as most sectors are vacillating between small gains and losses after investors responded to disappointing consumer sentiment data, assessing the possibility that there will be additional fiscal stimulus in the U.S. and Europe in the wake of a continuing spike in coronavirus cases.

The Dow is down 0.11% after giving back some earlier small gains, while the S&P 500 is struggling to stay above 0.22%, with the Nasdaq Composite in the same boat.

Stocks relinquished early gains to trade mixed following a U.S. consumer sentiment index reading that revealed a collapse to 73.2 in July from 78.1, compared with projections for a reading of 78.6.

“In short, the index weakened in early July as sentiment soured no doubt reflecting a surge in virus cases that is once again restricting activity and clouding the outlook, especially as it relates to job prospects,” said Rubeela Farooqi, chief U.S. economist at High Frequency Economics, in a note.

“Sentiment will likely remain subdued in the absence of a more substantial health response that will result in better virus containment and prevent repeated closures that will cause more permanent damage to the labor market,” she said.

The continued climb in coronavirus cases in the U.S. has been somewhat compensated by optimism over scope for additional fiscal stimulus. The White House and lawmakers are encountering mounting pressure to generate another fiscal stimulus plan ahead of the expiration of supplemental unemployment benefits at the end of the month.

“Further fiscal stimulus could give the bull market fresh legs, with equities having already priced in the current unprecedented monetary policy support,” said Han Tan, market analyst at FXTM, in a note.

“Should fiscal policy makers disappoint and deny stock bulls the fuel they desire, we could see the rapid erosion of gains from recent months,” Tan said.

The United States reported 77,255 new cases of the coronavirus on Thursday, smashing its record single-day spike by nearly 10,000, according to data compiled by Johns Hopkins University.

New cases are spiking in nearly every state, with forty-four states and the District of Columbia all reporting that the seven-day average of daily new cases climbed by over 5% on Thursday from a week earlier, according to the Hopkins data.
One bright spot in the market was housing starts, which came in at a 1.19 million seasonally adjusted annual rate in June, the Commerce Department said Friday, a 17% increase from May.

“One of the ironies of this recession is that the weakest part of the economy in the previous recession — housing — is now one of the shining stars in an otherwise challenging year,” said Chris Zaccarelli, chief investment officer for Independent Advisor Alliance.