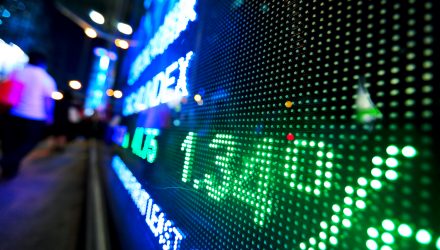 The Federal Reserve announced that banks could resume buyback plays and raise dividends starting in early summer, a move that helped boost bank stocks like JPMorgan and Bank of America and ETFs like the SPDR S&P Bank ETF (NYSEArca: KBE).

Travel and leisure stocks also continued to climb on Friday, with American Airlines gaining 1%, as Royal Caribbean, Carnival, and Norwegian Cruise Line all added over 1%, helping to lift the U.S. Global Jets ETF (JETS) by a similar percentage.

“It is hard to keep up with this economy,” Bank of America economists wrote in a note Thursday.  “We expect a near-term burst of inflation not only reflecting base effects but also due to transient inflation bottlenecks as demand increases faster than supply for certain categories of spend.”

The ongoing vaccine rollout may also be helping with consumer sentiment in the U.S., which has continued to climb.  A University of Michigan survey released Friday pegged the final reading of the index of consumer sentiment at 84.9 in March, a gain from 76.8 in February. Economists polled by Dow Jones projected a reading of 83.7.

“Consumer sentiment continued to rise in late March, reaching its highest level in a year due to the third disbursement of relief checks and better than anticipated vaccination progress,” Richard Curtin, chief economist for the university’s Surveys of Consumers, said in a statement. “As prospects for obtaining vaccination have grown, so too has people’s impatience with isolation, as those concerns were voiced by nearly one-third of consumers in March, the highest level in the past year.”

After stocks appeared to be headed for a losing week yesterday, major averages reversed in volatile trading, and are targeting small gains for the week. The S&P 500 and the Dow are both up about 0.4% this week, while the Nasdaq is just above the flatline mid-Friday.

“If you’re positioned the way we are, which is for a cyclical recovery and being overweight the value sectors, certainly you can’t run a victory lap here,” Jason Trennert, CEO of Strategas Research Partners, said on CNBC’s “Closing Bell.” “But it is nice to see, after the last six days, that some of the trends that have been in place for the better part of six months seem to be reasserting themselves.”