You are at:Home»Featured»Stock ETFs Target Fourth Positive Day Out of Five 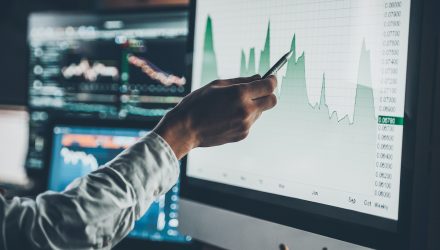 Stocks and index ETFs rallied for the fourth day out of the last five on Friday, with the key benchmarks looking to complete their best week since November, as investors digested economic data and await additional fiscal stimulus.

Markets may be continuing their ascension thanks to investors’ appraisal of lackluster economic data as a reason to further the stimulus argument.

The Labor Department revealed that the U.S. saw 49,000 additional jobs in January, a number slightly below the 50,000 predicted by economists. In addition, while the unemployment rate slipped to 6.3%, better than prognostications of 6.7%, December’s numbers were revised much lower, with the month posting a loss of 227,000 jobs.

“The jobs number was particularly underwhelming as far fewer jobs were expected,” said Chris Zaccarelli, chief investment officer at Independent Advisor Alliance. “Ultimately, the stock market is anticipating continuing healing in the economy and has been moving higher because of Federal stimulus, which arguably is the bigger story.”

Stimulus negotiations have been ongoing for months now, but the Senate passed a budget resolution early Friday, as Democrats push forward with the process to pass a one-sided $1.9 trillion coronavirus relief bill. The package includes $1,400 stimulus checks, a supplemental jobless benefit, and coronavirus vaccine and testing funds.

After posting steep losses last week due to a retail trader debacle, major averages are headed for their most successful weekly performance since November, with the Dow adding 2%, while the S&P 500 and the Nasdaq have climbed 4.6% and 5.6%, respectively.

“The rally’s three pillars actually got stronger: Q4 earnings continue to dramatically exceed expectations, more stimulus is being poured into the economy, and the vaccination pace is accelerating,” Adam Crisafulli, founder of Vital Knowledge, said in a note.