You are at:Home»Featured»Stock ETFs Take a Breather from Rally Amid Earnings News 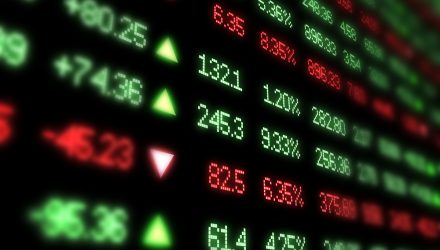 Stock ETFs Take a Breather from Rally Amid Earnings News

Stocks and index ETFs are mixed on Wednesday, slipping a bit after a robust two-day drive higher, as investors considered a fresh batch of corporate earnings.

The Dow Jones Industrial Average has been flat to lower Wednesday, after failing to breach Tuesday’s high. The S&P 500 is also flat to marginally higher, while the tech-heavy Nasdaq Composite is somewhat lower on the day as well.

Huge Earnings for Google and Amazon

While the market sectors are largely mixed on Wednesday, Google’s parent Alphabet surged over 7.6% after the technology behemoth reported 23% revenue growth, smashing earnings estimates thanks to Google’s recovering advertising business. The moves helped to boost the Fidelity MSCI Communication Services Index ETF(FCOM), a key holder of the stock.

Amazon reported robust earnings that were almost twice analysts’ estimates, while delivering its biggest revenue of all time at $125.56 billion, pushing it past the symbolic $100 billion mark for the first time. Yet the retail giant’s stock is trading lower amid news that Jeff Bezos was stepping down as CEO.

Overall, markets seem more placid as compared to last week, where a Reddit-driven retail trader rally irked markets, sending them lower over fears of a potential bubble. The Dow gained more than 2% this week after posting its best day since November on Tuesday. The S&P 500 also advanced, adding more than 3% this week, while the Nasdaq has grown 4% so far.

“Short squeeze fears abate and contagion contained for now,” Maneesh Deshpande, head of equity derivatives strategy at Barclays, said in a note. “Despite the relatively strong blowout in these names, on an aggregate level the subset of short squeeze stocks impacted continues to be a negligible fraction of the U.S. equity market.”

Treasury Secretary Janet Yellen requested and received authorization from ethics officials to examine issues such as the Reddit-driven volatility on Wall Street, according to a Treasury official.

“Secretary Yellen believes the integrity of markets is important and has asked for a discussion of recent volatility in financial markets and whether recent activities are consistent with investor protection and fair and efficient markets,” a Treasury spokesperson said in a statement.

Investors are also watching negotiations in Washington, as lawmakers grapple over the details of another stimulus package. President Joe Biden met with the 10 Republican senators on Monday to consider an alternative to his $1.9 trillion package.

Meanwhile investors noted that economic data improved, with private firms adding 174,000 jobs in January, beating the 50,000 Dow Jones estimate, according to a report Wednesday from ADP.